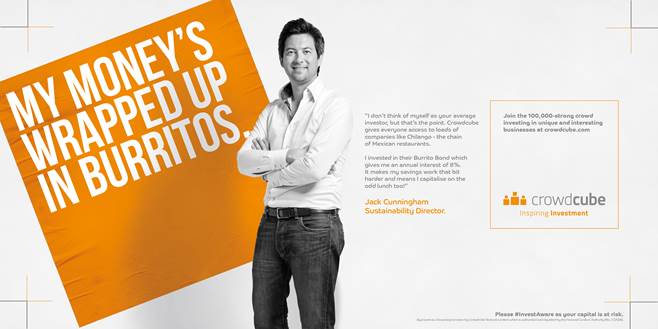 2014 was an exceptional and memorable year for the world’s most successful equity crowdfunding platform Crowdcube. Over the last 12 months Crowdcube raised £35.9m for 105 businesses across the UK and its international partners, a growth rate of 133% over 2013. This is more than double what other UK platforms have achieved, and confirms Crowdcube’s title as the world’s first and biggest equity crowdfunding platform.

The popularity of the platform is further demonstrated by the number of registered investors rising by more than 65,000 to 122,000 during the year. In addition, the company trebled its headcount from 15 to 45 staff and opened offices in London and Scotland. An infographic of these statistics and other crowdfunding facts is online here.

Crowdcube ended the year on a high note: it was the only equity crowdfunding platform amongst the six successful bids selected by the Government-backed London Co-Investment Fund (LCIF). Along with consortium partner Braveheart Investment Group plc, it was awarded £5m of the £25m pot to invest in London’s tech start-ups – the highest amount awarded.

Luke Lang, co-founder of Crowdcube said: “2014 was a pivotal year for Crowdcube. We have continued to grow our business faster and deeper than we expected and are leading the market in terms of funds raised and innovative new investment offers such as our Venture Fund and Mini-Bond. But the crowning glory was when the UK Government recognised equity crowdfunding as an effective way to finance small businesses by giving Crowdcube £5m to invest in London’s top start-ups. This not only highlights our reputation as Britain’s number one source of finance for entrepreneurs, but it validates the entire crowdfunding model.”

Other key highlights for Crowdcube included:

· World’s first crowdfunded mini-bond – launched in June, the Crowdcube Mini-Bond takes a lot of the pain out of what was previously a time-consuming, expensive way to acquire capital. Now established brands can bring their fundraising to market much faster. The Mexican fast-food chain, Chilango was the first to use the service, launching its Burrito Bond and securing £2m from its customers and Crowdcube investors. Other successful mini-bond campaigns followed from Hugh Fearnley-Whittingstall’s River Cottage and Tim Smit’s Eden Project; both reaching their targets in record times – less than 36 hours and five hours respectively.

· £million deals – Of the year’s 105 successful crowdfunds, several secured significant sums from the crowd including the latest Stelios start-up, easyProperty, which raised £1.4m; Caterham F1 which had 6,467 fans rallying to its cause to the tune of £2.3m; and LOVESPACE, the latest venture from Brett Akker, co-founder of Streetcar, with its £1.5m raise.