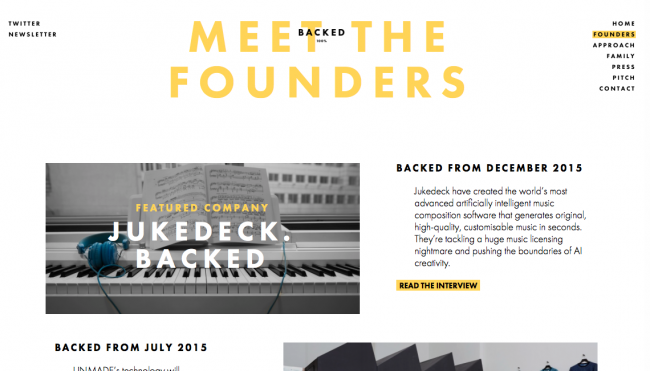 Backed’s founder is 28 year-old Andre de Haes, whose career has taken him to Andreessen Horowitz and Index Ventures, either side of a Stanford MBA. It was during his time at McKinsey & Company that he worked with fellow Oxford graduate Alex Brunicki, also 28, who completes the founding team. The Backed team sees its youth as integral to what sets it apart from other venture capital funds. De Haes notes: “How many VCs can truly say that the founders they back are their peers? We’re culturally connected to the entrepreneurs in our clan, and ingrained in the networks through which they build their teams.”

To deliver on its community-driven mission, Backed shares its profits with everyone who refers a company it backs. Furthermore, Backed is building software platforms that enable entrepreneurs to hire talent from across Europe, share knowledge and distribute marketing content, empowering them to help themselves and one another. Backed is similarly determined to bring transparency and collaboration to the venture capital industry itself, by sharing deal flow and diligence with other investors. Backed has also co-invested in all its deals with leading European and US funds, including Index Ventures, Connect Ventures, Valar and Floodgate.

Backed’s aspiration is to become the pre-eminent seed fund across Europe. To achieve this, De Haes and Brunicki focus on industries where Europe leads Silicon Valley, because they invest only when they believe a company could dominate its field on a global level; these industries include fashion, music, gaming and fintech. De Haes explains Backed’s stage focus: “We see ourselves as talent scouts, backing obsessive founders extremely early and specialising in addressing the pains they face at seed.” Backed intends to fill the void left by traditional funds who have moved to cover Series A / B rounds in order to deploy more capital.

Ultimately, Backed hopes to uproot the status quo in VC and to lead a broader movement fostering millennial-driven innovation. De Haes witnessed first hand how Andreessen Horowitz turned the US venture capital industry on its head, and wants Backed to play a comparably pivotal role in Europe. He explains: “VCs invest in innovation, yet in Europe have largely failed to innovate on their own business model. We are able to start with a blank slate and take a 30 year view to transcend the old model.”