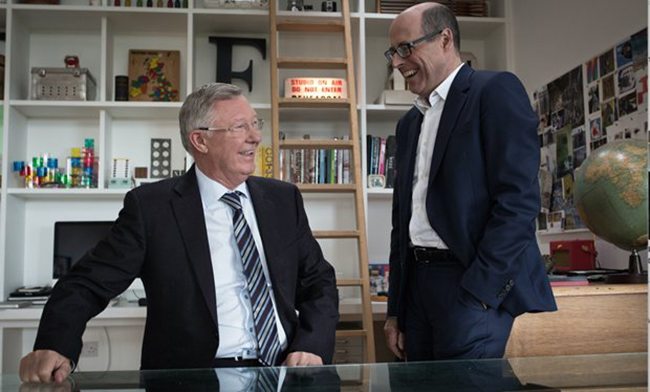 What is heaven like if you’re a teenage boy? I can tell you. I’ve seen it with my own eyes. Heaven is competing with your brother in a quiz to reveal who knows most about the team you both love, with the questions being posed by a man you’ve looked up to for your whole life – your footballing hero.

So it was for my lucky boys a few weeks ago when they were in the kitchen of a house in Wilmslow, Cheshire. After years of putting politicians on the spot, Dad was finally interviewing someone they cared about. Their quizmaster – who was having powder put on his face by a make-up artist – was the man described by Harvard University’s Business School as the most successful British football manager of all time.

He is Sir Alex Ferguson, the subject of my BBC1 documentary, which examines the secrets of the success of a man who managed Manchester United for over a quarter of a century, and whose 49-trophy haul is unlikely to ever be matched. As someone who’s spent his career studying and analysing leaders and, yes, as a lifelong United supporter, I’ve long wanted to explore what lessons the most consistently successful leader I’ve ever seen can teach others, whether on or off the pitch.

Harvard professor Anita Elberse says, “I think he’s one of the world’s alltime great leaders… I think there’s something to be learned from him for virtually every leader in whatever industry it might be – whether it’s politics, or whether it’s business or whether we’re talking about another domain.” The classes Elberse runs with him in “Fergie Studies” – not, of course, their official title – attract young entrepreneurs from around the world. I tease him by calling him Professor Ferguson. His real title is fellow to the executive education programme at Harvard Business School.

I interviewed Sir Alex for many hours over two days. My aim was not to get him to relate his favourite football anecdotes but to explain and analyse why he was so successful for so long. His answer is summed up in one word: consistency. “In the 26-and-a-half years I was there, I never changed my conviction or my philosophy or my attitudes – and I think the players recognised that. Every day it was the same guy… That consistency created players who were consistent. The club was consistent – and that’s what made it the best club in the world. Without question.” Fergie is self-aware enough to know that for all his footballing triumphs he could not simply switch to the Cabinet or boardroom, the factory floor or the battlefield, and match that success.

However, he knows too that there are parallels between what he did and what other leaders must do. So, we discussed how he set out to change the culture of a struggling organisation (which United certainly was in the mid-80s, when he was hired); saw the need to be constantly open to new ideas and prepared to change; learned how to manage up as well as down and understood how to motivate not just his first-team players but all those who contributed to the success of the club – including the groundsmen, the laundry women and the canteen staff – all of whom he knew not just by name but as characters.

“The first thing I had to do at Manchester United was rebuild the club. I think the club is the essence of the venture of making a successful team. Most managers go to a football club because it’s a ‘result’ industry. They’re there to turn around the fortunes of the first team, that’s why they get the job. I never thought that way. My philosophy was to build a football club.” Paying attention to these “details” were, he told me, “all points to the top of the mountain”, adding, “When you’re at the top… and you’ve got there and the view is beautiful. In normal circumstances you have to come down the mountain. Not in football. At Manchester United you have to stay up there and look at the view – you can’t come down.”

It became clear to me that the foundation of Sir Alex’s success is the remarkable people skills I witnessed in that Cheshire kitchen. Wowing a couple of teenage football fans might seem like no big deal, but instantly recalling precisely where and when he’d first met them many years earlier is.
Remembering the names of the filming and technical crews and staying on after filming to open a magnum of rather fine vintage champagne and pouring each of them a glass was even more so.

The graduates of the Fergie school of management explain why he was so good at teaching, motivating and disciplining young men from every part of the globe. At Harvard they ask students to examine how much leadership is about love, and how much about fear. The answer, perhaps predictably, is that both are key. Cristiano Ronaldo, arguably one of the world’s greatest players, told me that “it was a family with him in Manchester United… He made me feel like ‘Cristiano, this is your house.’”

Still clearly moved by the memory, he described the support he was given when his father was seriously ill. “When my daddy was sick in London, and he was in hospital, very bad, in a coma, I had a conversation with [Ferguson] and I say, ‘Boss, we are in a key moment in the league, in the Champions League,’ but I say, ‘I don’t feel good, I want to see my dad.’” Fergie replied: “‘Cristiano, you want to go one day, two days, one week – you can go. I’m going to miss you here, because you know that you are important, but your daddy is in first place.’ When he told me that I feel like, ‘Phew, this guy is unbelievable… This is why I love him.’”

One of Britain’s finest-ever home-grown players, Ryan Giggs, explains how the man they called “The Boss” knew when to put an arm round a player and when to turn on what became known as the “hairdryer” – when he shouted so close to a player’s face that they could feel and not just hear his anger. Giggs jokes that he made a mistake that he regretted for 20 years by upping his game after his first experience of the hairdryer. From then on the manager knew that what some would see as bullying got the best out of one of his star players.

Fergie’s rival and friend, Chelsea’s Jose Mourinho, says that the United boss knew how to be a father one minute, a brother or friend the next, and also an enemy when needed. It’s clear that Ferguson sought to turn his club into a family by applying the lessons he’d learned growing up in Glasgow, in the shadow of the Govan shipyards. He saw his job as not merely managing players but shaping the characters of the young men he led, just as his mother and father shaped his. At six o’clock every morning Ferguson Sr used to kick the foot of his sleeping son to wake him and to get him up for school, and later work. Until the day he retired, Sir Alex would pride himself on arriving before players more than five decades his junior.

Rio Ferdinand says that players in their teens and 20s marvelled at the fact a guy in his 60s turned up for work earlier and left later than anyone else. The Govan coat of arms carries the words “nihil sine labore” – nothing without work. United’s triumphs were, Fergie says, “an expression of the consistent application of discipline”. On his first day at Old Trafford he told his players that since he wasn’t going to change they would have to. That meant not just turning up on time but also dressing as ambassadors for the club.

So, out went track suits and in came blazers, shirts and ties. At this point I grin sheepishly and apologise for doing our interview tie-less. This inspires an off-camera tirade about the casual style of the Match of the Day team. Young Alex was once criticised by his father for enjoying himself too much. When it was his turn to lead, Manchester United’s manager made it his mission to stop his players’ excessive drinking. “Show me the evidence that alcohol makes you a better player,” he told them. It becomes clear as we talk that the relationship between the Ferguson father and son was not always easy. “His voice was enough,” Sir Alex tells me. “He was a quiet man, but when he wasn’t happy with you, he raised his voice, and that was enough.”

Yet sometimes silence was the way anger was expressed. After one argument about whether Alex should play for the juniors or the seniors, the two men did not speak to each other for seven or eight months, despite living in the same house. Sir Alex explains that he learned from that, too. Silence, he tells me, was often as potent a way to express your anger or dissatisfaction as turning up the volume. In a 2001 league match, when United were 3–0 down to Spurs at halftime, his players awaited nervously for the full hairdryer treatment. Instead he said nothing to them, save to comment that the next goal would win the game. United scored it and went on to stage a remarkable comeback: the final result was 5-3.

If family shaped his style of leadership, it also determined when his time was and was not up. In 2001, Sir Alex announced his intention to retire at the end of season, after he’d turned 60, but was told by his wife Cathy not to be so stupid. Yet the trigger for his finally calling it a day was when Cathy’s twin sister died. At the age of 71 he concluded that he now, at last, owed her more of his time and attention. Tony Blair told me that he was fascinated by the way Sir Alex combined “strength… with what was obviously a very reflective self-analysis, and analysis of his position as leader – from which he derived lessons that I think anyone can learn from”.

I prefer the verdict of my eldest son, who will never forget the moment he was leaving the house where we were still filming. As he reached the door, he heard his name being shouted in very familiar Glaswegian tones: “Wi-ill!” He says his blood froze as he wondered what he’d done wrong. In fact Sir Alex simply wanted to say goodbye. I looked at Will and realised that if Sir Alex had then ordered him to jump out of the nearest window, he might well have done so.

Sir Alex Ferguson: Secrets of Success was broadcast on Sunday 11th October and will be available on iPlayer for 30 days.