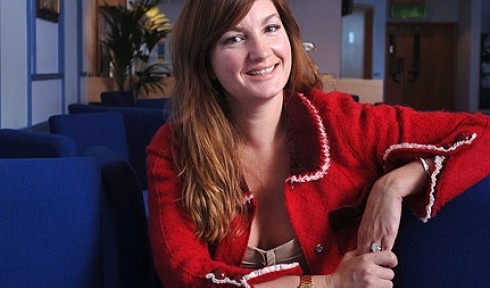 How did your childhood influence your attitude to money?
My father, who was a printer, always worked very hard indeed, so I think I always had a very healthy attitude to money. Equally I had a very comfortable upbringing so I didn’t know real hardship like some people know. Both him and my mum, who was a housewife, had a relaxed, sensible and healthy attitude towards money. I was very lucky that I had a very good education. And I was brought up with one of the best ingredients you can give children – self-esteem and confidence.

How did this help you achieve so much so young?
I always thought if you worked hard and put in the hours you got rewarded. I had high expectations. I always think if you take care of the job in hand, then the next job will come along. If you’re worrying about the next job you won’t get it. I think some people look at other successful people and think it comes more easily than it does. They don’t see all the hard graft and sacrifices that have been made. I’ve been doing my job for 15 years and I didn’t have a holiday for 13 of them.

Do you think being comfortably off makes you happier?
I think if you’re unhappy, it’s better to be unhappy and rich than unhappy and poor. Having money gives you an awful lot more choices. If you’ve got children and you’ve got money it allows you to have help and good schooling. One thing I would say is that people who work want high-quality, affordable childcare and if you can’t get that, then you’re scunnered. Paul retired this year, but until then I had full-time help and I couldn’t go to work unless I knew my children were happy, safe and well looked after. I think the Government should allow working mothers to write childcare costs off against tax.

Are you more of a saver or a spender?
I’m a saver. I made a decision that I would spend every penny until I was 25, then save as much as possible.

I had a great time in my early twenties – I shopped, ate out and took my friends on holiday with me. Then I bunkered down when I met Paul, got married and had the kids. I had other people to think about and my focus was on security. When you have a family your priorities do change – you have school fees and mortgages. I’m very cautious.

I’m often asked to be on the board of high street banks, but I’ve never done it because I’m far too cautious. It’s easy to be gung-ho about someone else’s money. I work very hard for my money and I’m not a gambler, I’ve never put a bet on in my life and I’m not interested in any get-rich-quick schemes or cutting any corners. I believe in working hard and living life to your means.

Have you learnt any difficult lessons about money over the years?
Back in the Eighties I bought a place near Tower Bridge and when I sold it two years later, it had fallen into negative equity. Ever since, I’ve not had an attitude that all property makes money, even when the market was booming. What I learnt is that you’re better off buying the smallest apartment in the best area rather than the biggest apartment in the worst area, and that’s the mantra that I followed.

People always want to live in desirable places; you can never convince people to live in bad areas. I had the chance to buy a lovely but small place in another area and if I had done that I would have made a killing. One of the things you don’t realise when you live at home is the cost of living, rent, rates and so on.

I torture myself by looking at how much flats are in that area. I now only have the one house in Birmingham and Paul owns a house in Canada. It made me realise that nothing is infallible, really, and if I don’t understand something, I won’t get involved, like betting. I don’t understand it or how it works, so I don’t do it.

Do you have a financial adviser?
I like to support local businesses, so I have someone local to me in Birmingham. They’ve got an excellent reputation and understand I’m not interested in any get-rich-quick schemes. I’m just interested in protecting the capital I worked very hard to get. I know nothing about taxes or anything, so I say to my adviser and accountant, “Just keep it simple”, and “What would you do if you were me?” I think if you trust them and trust their response then that’s priceless.

Have you ever been in debt?
When I first started out working, I was, but I was very lucky in that I quickly rose through the ranks. So, having a good job, I was able to trade my way out of it. I think when you’re young you’re much more frivolous about things, but now I don’t buy things I can’t afford. I hate the idea of being in debt, it makes me very uncomfortable and that carries over to how I run Birmingham City. I was very proud knowing we were one of the few premiership teams running a profit.

Are you a Cash, Card or Cheque person?
Definitely credit card. I never have cash on me. I just have one card as I only need one, although I am going to apply for the American Express BA card, so I can rack up the air miles.

Do you tip?
I’m a good tipper. I tip hairdressers very well because my oldest friend was a hairdresser and she used to live off her tips and I always remembered that. I also tip taxi drivers. If I’ve had bad service I will not tip, but I tip well for good service.

Are you a saver or an investor?
I’ve had the same bank account with NatWest since I was 16, and most of my savings go straight into a high-interest account. In recent years, I’ve bought Premium Bonds and National Savings & Investments Certificates because I like the safeness of them in
a turbulent market.

How do you feel about online banking?
I have the ability to do it, but it kind of scares me to be honest. I can’t pay cheques in virtually, so it’s only really helpful to me if I want to move money around in different accounts within my bank. I’m very lucky there’s always someone at the other end of the phone at the NatWest and I prefer to deal with a human.

Do you have a pension?
No, I don’t like them! I think you have to be your own pension and build your own provisions, rather than relying on someone else to control your finances in your old age. So many people have had faith in company and government pension schemes and invested their hard-earned wages, only to see their value drop dramatically in recent years.

What is your biggest indulgence?
Clothes, especially by Osman Yousefzada – he sells in Selfridges and Harvey Nichols, and he has a studio in London. It’s important for work that I project the right image, but neither do I want to wear typical power suits. It’s possible to have style in the boardroom.

What was your best holiday?
We went to Sandy Lane in Barbados with the children a few years ago. I love holidays, however scarce they are, but usually I’m ready to come home at the end. I wasn’t then and I think that’s a good indicator that it was a fantastic holiday.

Brady has written four books; a factual account of her first season at
Birmingham City, ‘Brady plays the Blues’ two novels, ‘United’ and
‘Trophy Wives’ and her latest book ‘Playing to Win’ is about successful
women in business. She is also a columnist for The Sun newspaper; the
UK’s biggest selling national daily newspaper, The Evening Mail in
Birmingham, and The Guardian.

She is a judge of the Cosmopolitan
Women of Achievement Awards and the Sports Industry Awards. She is on
the business Board of Scope, and the Ambassador for Birmingham Women’s
Aid. She is Chairman of Kerrang! (EMAP), and a Board Director of
Mothercare PLC, Channel 4 Television and Sport England. She is an
honoree Fellow of the Institute of Sales and Marketing. She was voted
by Cosmopolitan as one of the 100 most powerful women in the world and
in 2004 and again in 2006 attended The Queen’s lunch for Women
Achievers and Business Leaders.