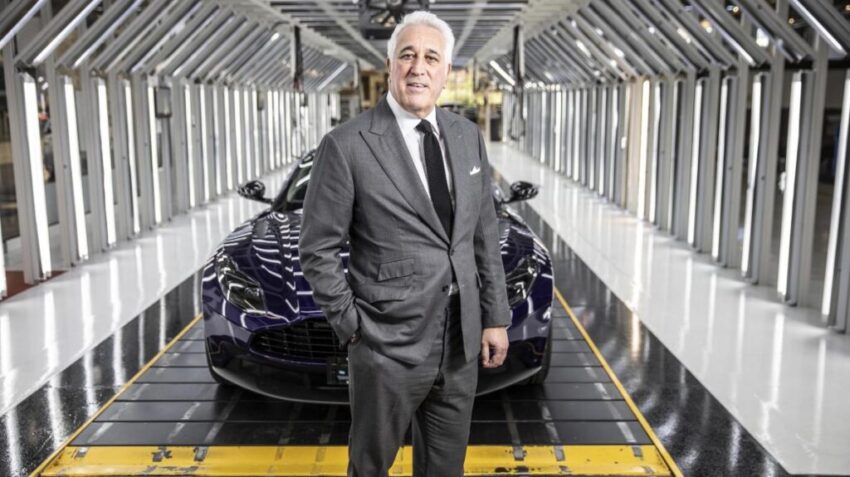 “Everything you see here being made has an order against it,” says the Canadian fashion tycoon. “The most important thing in luxury — it doesn’t matter if you are making handbags or automobiles — is you have to align demand with supply. Actually, there always needs to be one less than the demand. It’s creating a pent-up demand to want the product.”

That was far from the case at James Bond’s car-maker until very recently. When Stroll pulled up in January, dealers’ forecourts were awash with cars. Aston Martin had pumped too many products into a struggling market.

Stroll, 61, a “car guy” with a collection of Ferraris that includes some of the world’s rarest, has put it on a diet. The billionaire, who made his fortune with the brands Tommy Hilfiger and Michael Kors, had not initially intended to buy Aston; he was keener on getting it to work with his Formula One team Racing Point.

However, he was persuaded to join a long list of wealthy enthusiasts who have tried to revive the marque over its chequered century of existence.

Since it was created in 1913 by Lionel Martin and Robert Bamford in London, Aston has swallowed multiple fortunes and belched for more. Victor Gauntlett, its chairman in the 1980s, said the only way to make a small fortune out of Aston Martin was to “start with a big one”. It has gone bust seven times. Its eighth was starting to look like a distinct possibility.

Floated on the stock market two years ago by its Italian and Kuwaiti owners, the company was pumped up by an army of bankers. Ex-boss Andy Palmer, former No 2 at Nissan, sold the City his “second-century plan”, which projected the launch of seven cars in seven years, and eventually sales of 14,000 a year.

The overstocked forecourts, Brexit, the US-China trade war, plus a series of profit warnings and delayed products, have destroyed 97% of its market value.

In January, with resources drying up, Aston returned to shareholders for a rescue cash call. In came Stroll and a consortium of wealthy backers including JCB owner Lord (Anthony) Bamford and Silas Chou, Stroll’s fashion partner. The Canadian tycoon took the role of executive chairman and replaced Penny Hughes, the chairwoman who had overseen the disastrous float. Stroll’s gang took 25% of Aston’s shares as part of the £536m cash call, last month following up with another fundraising that handed 20% of the company to Mercedes, in return for its latest technology and eventually gear to power electric cars. Out went Palmer, in came Tobias Moers, German boss of Mercedes’ high-performance AMG division.

Dressed in a grey suit and monogrammed white shirt, with a shock of white hair and bushy black eyebrows, Stroll fills the glass and leather-padded office he has commandeered in Aston’s HQ at Gaydon in the Midlands with his booming baritone and imposing figure.

“Stroll is a person who takes no prisoners,” says a source close to Aston. “The word ‘determined’ comes to mind. He knows luxury better than the previous management, that’s for sure.” Stroll is a “bit old-style”, adds the source, given his love of big-engined supercars and the F1 paddock. But the automotive world is changing fast, and rivals fear being regulated or shamed out of existence.

Last week, Volkswagen-owned Bentley said it would go fully electric by the end of the decade.

So there is a hint of anachronism about Aston. While rivals launch electric and hybrid hypercars, its much-delayed Valkyrie, to be launched next year with a £2.5m price tag, will be powered by a 6.5-litre V12 engine. “That is the greatest hyper sports car that will ever be made,” says Stroll. The new £250,000 Vanquish supercar will be powered by a hybrid engine, but arrives in late 2023, with Aston’s first electric car not due till 2025.

Stroll shrugs off any doubts. “We have a full electric car plan,” he says. “[Aston] ultimately ends up at full electric but there’s a whole transition in between about electrification, about hybrid.”

Born Lawrence Sheldon Strulovitch in Montreal, he fell in love with luxury under the tutelage of his father and mentor Leo Strulovitch, who brought the Pierre Cardin and Ralph Lauren brands to Canada. At eight he was sweeping floors and packing boxes. At 17, his father handed him the Pierre Cardin licence for Canada and challenged him to grow it. He did. He met Ralph Lauren and won the right to expand the brand into Europe while in his early twenties, again successfully. In 1989, Stroll bought a “struggling company doing $5m of sales called Tommy Hilfiger”. It was doing $3bn when he sold up 13 years later. He then took Michael Kors from sales of $14m to a $20bn New York Stock float.

Bamford met Stroll about 25 years ago at a rally in France where they both raced their Ferraris. “We’ve been friends ever since and I admire him,” says Bamford. “He is a forceful personality — if he’s got an idea he will keep pushing it … He also has a reputation for hiring the best people.”

Stroll is devastatingly blunt about Aston’s recent history. “A lot of analysts and journalists were misled and have what I call a mad-on hangover about this company because of what the previous management did,” he says. “They over-promised and under-delivered.”

There is, he says, plenty of “low hanging fruit” for Moers to pick — from duplicate factory costs to expensive parts. “They were not lean.”

Stroll has the sales patter of a man who lives, breathes and makes his substantial fortune — $2.6bn (£2bn) at the last count — from selling expensive things to wealthy people. Understated he is not. Aston, he says, is “the greatest brand in the world for luxury automotive” — regardless of what a certain rival in the Italian town of Maranello might say.

Its recent fundraising, borrowing at a rate of 10.5% on more than $1bn of bonds, means “this company is funded for ever”. And Aston’s battered share price — which at 52.8p sits below its recent 62p a share fundraising — will be “£6, £7 or £9 over the next five years”, Stroll proclaims.

His confidence is based on a strategy of launching six variants of its DBX sports utility vehicles, using new Mercedes technology to upgrade its models, and marketing the brand through a new Aston Martin F1 team next season. Unlike the current Red Bull deal, which he calls “a sticker on a Red Bull”, it will be a full works team, in British racing green. “There is no greater platform to market luxury sports cars than to have your own Formula One team.”

The marque will soon easily be selling 10,000 cars a year and generating £500m of core profit by 2025, he insists. Brexit will be settled by then — in any case, he “wasn’t losing sleep over it” — and despite Covid-19, sales from China are picking up. Stroll is not restrained by modesty, declaring his achievements in six months — new management, new investors, clearing the stock glut of 1,800 cars — “more than remarkable, it’s monumental”.

“This is what we should be judged on: what has Lawrence done since taking over?” he says. “And what is the history of Lawrence? We all know what I’m worth.”