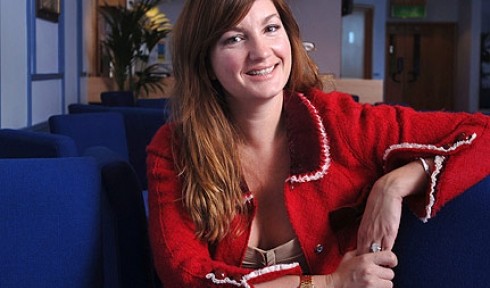 Karren Brady, 40, will replace Margaret Mountford, who has left to study for a PhD in ancient literature, on the BBC programme.

She appeared in Comic Relief Does The Apprentice in March 2007, leading the
women’s team to success and making more than £775,000 for charity and was part of Sir Alan’s interview panel in the last series.

“I am thrilled to be involved, having worked with Alan for 16
years,” Brady said. “It’s great to extend our relationship to the
programme.”The pair have known each other because of their shared interest
in football. Lord Sugar was chairman of Tottenham Hotspur 10 years
until 2001. Miss Brady first became managing director of Birmingham City at
the age of 23 in 1993 after being plucked from Saatchi & Saatchi by new owner and flamboyant publisher David Sullivan.

For many years Brady was dubbed the ‘First lady of football’ and guided the club to the top tier of UK football with a new ground and solid financial footing, but has been surrounded by an investigation into football corruption of late and secured the sale of the club to new owners in the last month.

Brady has written four books; a factual account of her first season at Birmingham City, ‘Brady plays the Blues’ two novels, ‘United’ and ‘Trophy Wives’ and her latest book ‘Playing to Win’ is about successful women in business. She is also a columnist for The Sun newspaper; the UK’s biggest selling national daily newspaper, The Evening Mail in Birmingham, and The Guardian.

She is a judge of the Cosmopolitan Women of Achievement Awards and the Sports Industry Awards. She is on the business Board of Scope, and the Ambassador for Birmingham Women’s Aid. She is Chairman of Kerrang! (EMAP), and a Board Director of Mothercare PLC, Channel 4 Television and Sport England. She is an honoree Fellow of the Institute of Sales and Marketing. She was voted by Cosmopolitan as one of the 100 most powerful women in the world and in 2004 and again in 2006 attended The Queen’s lunch for Women Achievers and Business Leaders.

It
is thought that Michelle Mone, who founded the company behind the
Ultimo bra, and Martha Lane Fox, the internet entrepreneur, were also
considered for the job in a much discussed potential short-list reminiscent of those drawn up by the press when a football manager leaves a club, of replacing Miss Mountford.

She
said on leaving the programme: “I never had any desire for fame or TV
stardom, but I’ve enjoyed discovering the world of making television.

“When
we made the first series of The Apprentice for BBC Two in 2004/5, we
had no idea how popular it would be or how long it would run. I thought
it would just be a one-off. It has been a great experience.”