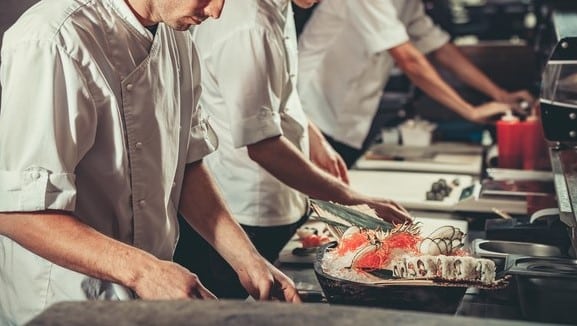 Christopher, a 25-year-old (now sushi cook & sushi business owner in the Philippines) was a mere beginner in Japanese cooking, when he first saw an ad on Facebook. The ad was about a 100% Online Sushi Masterclass, that was targeted for people who wanted to reach a professional level.

Although he hadn’t heard of this school before The Master of Japanese Cuisine Academy, he was intrigued and decided to take a chance for 2 reasons.

One – he had wanted to become a sushi chef for so long.

Two – the program and more importantly the instructors looked legitimate.

After completing the 6-week online sushi course, he made his entrance into the Japanese culinary world. A hotel in Manila hired him as their sushi cook, despite the global Corona crisis. Sounds like a success story, right? Well, his story doesn’t end there.

He felt so confident in his culinary skills (thanks to the training he received from the Academy) that he started his very own sushi catering business, shortly thereafter.  That business has been growing more and more successful, with each passing day. He states, “This wouldn’t have been possible without taking the Online Sushi Masterclass and learning from the Best, a real master chef.”

Chris’ story is one of many successful examples, who by joining this Online Academy opened his culinary career opportunities. Whether starting from the beginning or already experienced, it was all encompassing. Not only did he learn the solid foundational blocks of Japanese cuisine but became so advanced that he was able to secure a profession as a sushi cook and owner of a successful catering business.

Alex, a passionate sushi chef originally from Armenia who aspired to master the art of sushi, came across this 100% Online Sushi Masterclass through the owner of the restaurant he worked at, in Switzerland. The restaurant owner knew the great value of this school because he too had been a student of the very same teacher.

After Alex took the online sushi masterclass, he was headhunted by another restaurant to be a head sushi chef. Since then, he started his own sushi & Japanese cuisine restaurant in his home country. Something he only dreamt of doing, was now a reality. Alex says, “Learning from a true master chef really opened up my eyes. It was one of the greatest experiences of my life!”

Daniel, who lives in Germany, works as an engineer on the weekdays. However, his true passion lies in the culinary world. His fascination landed on the art of sushi and Japanese cuisine.  He did everything he could to learn it in his own country, watching as many YouTube tutorials as possible, while taking local sushi classes any chance he got. However, his hunger for the mastery of sushi and Japanese cuisine was not satisfied. He needed something more. One fateful day, he came across an Instagram post that unbeknownst to him would change everything. The 100% Online Sushi Masterclass was looking for an individual to participate in the testing of their new online sushi program. He jumped at this incredible opportunity. After taking this well-structured, ‘Tell-All-Secrets’ of Master Chefs’ online sushi program, Daniel was astonished at how little he actually knew about the art of sushi, despite all the efforts he had made before the program. Knowledge is power.

Kazumi Wickenkamp, the founder of the Master of Japanese Cuisine Academy, was deep in thought when she was working for a medical company in Europe. Despite the popularity of Japanese food rapidly spreading around the world, the quality was just not quite there yet. She wondered why? After a few months of research, she discovered that there were no training opportunities for international culinary talents to learn sushi or other Japanese cuisine at a professional level. Upon digging deeper, she realized that the only offerings were free YouTube tutorials and a few sushi schools in Japan, targeting international students.

That’s when inspiration struck! Kazumi came up with the world’s first 100% Online Academy of Japanese Cuisine for international culinary enthusiasts.

In September 2018, she opened her academy with a few Japanese master chefs. Since then, the academy has been offering high-quality educational programs of Japanese cuisine, not only for individuals, but also for the enterprises which seek quality culinary training programs for their employees.

This academy started literally from ground zero, but in March 2021, they received 2nd prize in the Japanese government-led awards called “Cool Japan Matching Awards”. The Japanese government acknowledged the academy’s modern & digital-based approach, to provide more educational opportunities of Japanese cuisine to the international culinary talents. This academy has officially become one to look out for.

So, where do they go from here? This academy is now expanding its program into collaboration with international cooking apps/platforms, as well as providing training programs to food industry enterprises. As long as the world craves more tasty sushi and other Japanese food, the possibilities are limitless for this academy to expand its vision, providing stellar culinary education and opportunities to the young culinary talents worldwide.

Now, you’re probably wondering how their program differs from thousands of free online content or other online cooking classes? Well, let me break it down for you.

Are you a closet Japanese Cuisine Enthusiast? Do you also want to learn the art of sushi or how to cook Japanese cuisine? Check out the 100% Online Sushi Japanese Academy’s website for further details!

So, what are you waiting for?

The time to start … is now!

Follow us on social media to receive the latest update!