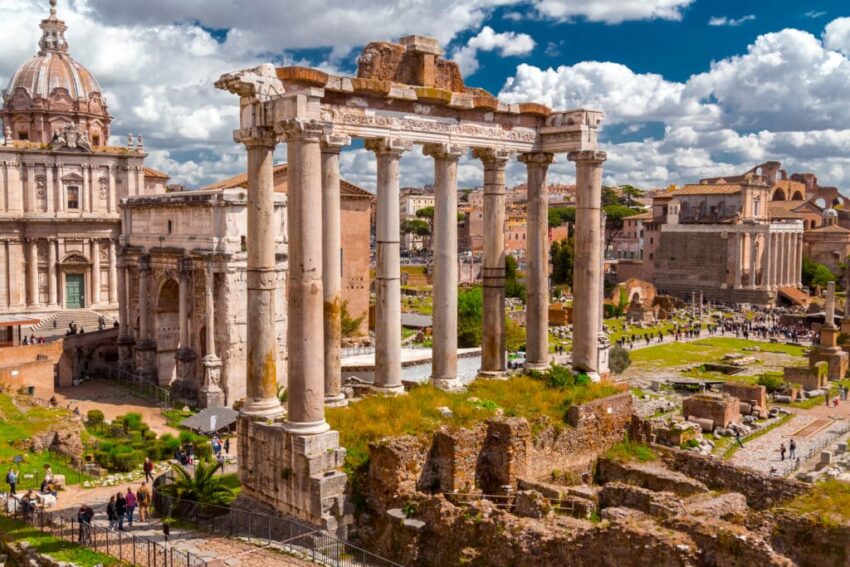 We imagine the Roman world to be far removed from our own.

PUGNARE: Economic Success and Failure offers the first historical account of the Roman Empire written from a practical business perspective. In it, author and academic Dr. George Maher explores the financial and economic parallels between those of ancient Rome and the modern day. The Chancellor’s forthcoming Budget statement offers one such example.

At lunchtime on Wednesday, 3 March 2021, the Chancellor of the Exchequer, Rishi Sunak, will put before Parliament the Government’s proposed Budget for the forthcoming financial year. It will include planned tax and spending commitments as well as forecasts for the UK economy.

Typically perceived to be a historically British procedure, it bears striking similarities to the system employed in ancient Rome.

With streams of revenue sourced from taxes and customs, it was the imperative of the Roman Senate to control the Budget. Like the British Parliament, no state expenditure was possible without the Senate’s approval. This placed a clear restraint on executive power, the Principal Citizen, mirroring the system of checks and balances on the executive that is employed in many modern democracies.

In resemblance to the British Treasury, the power to allocate funds lay with the most senior executives of the Senate, the Consuls. Once granted Senate approval, the Consuls were able to use these funds at their discretion.

It’s important to note that while vast amounts of state expenditure were devoted to military payments, public finances were invested into the state. The Consuls often faced requests for the funding of state projects from the state financial officials, the quaestors. As with local councils today, the quaestors required Senate approval following local funding requests for specific projects.

Indeed, every five years, the Senate would vote to allocate spending to the Censor, the highest official of the state. Alongside quaestor-requested funding, these funds were used for both the repair, maintenance, and construction of public buildings.

To say that the Roman Empire had a military-industrial complex similar to that of the UK’s and beyond would be an overstatement. Yet, the close relationship between the state and military nevertheless furthered the Roman war machine.

As noted, the most rewarding avenue for state revenue was Roman expansion. The spoils of war brought with it tribute that was distributed among those who had participated and the state; the newly acquired provinces provided a new influx of money for the state coffers through taxation. Examples can be seen in Pompey’s eastern conquests in 65 BC that delivered more wealth to the Roman Empire than Julius Caesar’s subsequent acquisitions of Gaul (58 BC-51 BC).

Further comparisons can be drawn from the political restraints placed on Roman Senators. To prevent illegal activity, the Senate introduced a number of rules to restrict their members’ involvement in business – albeit to varying degrees of success.

In 70 BC, and in scenes reminiscent of the MPs’ expenses scandal, Cicero argued ferociously for the impeachment of Verres, the “embezzler of public funds” and governor of the Roman province of Sicily. In his passionate speech, he argued that the revenues of the state were at stake, with “the more Verres took while governor of Sicily, the less there was to be transmitted to Rome”.

Within the British parliament, MPs are also held to similar restrictions. They must conform to a Code of Conduct, while their outside interests are subject to Parliamentary scrutiny. However, this has not prevented political scandals seen in recent years.

If we reimagine today’s parliament in Roman times, much of the structure would remain. The Senate was a body that controlled the state purse-strings in a similar way to our own Parliament with the checks and balances instilling a clear code of conduct.

Fundamentally, the liveliness of debate within the Roman debating chamber still lives on in the British parliament. Given the severe growth of the Government’s budget deficit during the pandemic we can expect the current Rishi Sunak to offer a more interesting budget speech than his predecessors – and, of course, an interrogation to match.

About PUGNARE: Economic Success and Failure

This thought-provoking book offers the first historical account of the Roman Empire written from a practical business perspective. It is also about people, because business is about people. We can learn a lot from their behaviour, from their successes and failures.

The book explores how the root causes of the economic disasters of our time are in many ways the same as those of the Roman Empire. The Romans were people like us and the wisest of their great men and women were as wise as the best of ours. Unfortunately, the most foolish of theirs were as foolish as the worst of ours.

The book is available online at BookDepository.com priced at £12.99

George Maher holds a PhD in the economy of the Roman Empire from King’s College London and both a first-class honours BA and MA with distinction in Classics from Birkbeck, University of London. He is a Fellow of the Institute and Faculty of Actuaries and holds a first-class honours degree in Special Honours Mathematics from Trinity College Dublin.