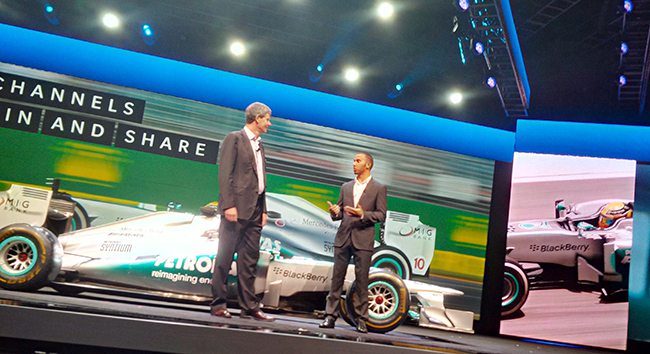 In a move which could prove disruptive to Skype, Whatsapp and other rivals Blackberry said it would initially offer texts, photo messages and group sharing functions on devices running Google’s Android and Apple’s iOS operating systems from “the summer”.

It added it planned to roll out screen sharing, voice and video calls – all without charge – later in the year.

Blackberry chief executive Thorsten Heins revealed the surprise news, which had been the source of recent rumours, at the end of his keynote presentation at the firm’s annual developers conference in Orlando, Florida, alongside F1 champion Lewis Hamilton.

The company said that more than 60 million Blackberry owners already used BBM at least once a month.

But Mr Heins played down the idea that offering the feature to rival devices would harm sales of the Canadian company’s own handsets. Saying: “You might ask the question why is Blackberry doing this now.”

Over the years the company has added functions including sending pictures, audio messages and other files as well as making voice and video calls, all over the internet.

In addition it offers a Groups facility which allows users to share photos, lists and calendar appointments with trusted contacts.

The latest addition is Channels – a feature allowing brands and celebrities to send news and status updates to users who want to follow them through the app.

Blackberry has a chance to leapfrog existing cross-platform rivals by bringing all these facilities to Android and iOS users.

However, with reports that Whatsapp could shortly add voice calls and that Google has been working on its own unified messaging service, Blackberry may find competition in the market is about to intensify.

“It’s a statement of confidence. The Blackberry 10 platform is so strong and the response has been so good that we are confident the time is right for Blackberry Messenger to become an independent multiplatform messaging solution.”

He added that for the app to work iPhone users would need at least iOS 6 and Android users the Ice Cream Sandwich version of Google’s software. There was no mention of Windows Phone.

One analyst said it was too soon to know if the move would force competitors to change their own strategies.

“Expanding it to be multiplatform not only widens the consumer appeal but also may help woo back corporate customers it lost due to earlier technical problems.

“However, other players like Whatsapp will only drop their fees if they see BBM making major inroads into other platforms.”

Ben Wood from telecoms consultancy CCS Insight added that Blackberry might have felt forced into the move because of the growing popularity of cross-platform alternatives which also includes Facebook Messenger.

“It will increase feature competition among mobile messaging platforms,” he said.

“It dramatically increases BBM’s long-term relevance – but it is unclear how Blackberry will ensure the move benefits its own hardware sales.”

Blackberry also announced a new smartphone powered by its BB10 system – the first to be targeted at emerging markets.

The Q5 features a physical Qwerty keyboard and a 3.1in (7.9cm) touchscreen.

The Blackberry 10 device will be released in parts of Europe, Asia, Africa and Latin America in July and it is expected to be cheaper than the Z10 and Q10 which were unveiled in January, however, the firm has yet to confirm pricing.

“We understand the importance of having devices to suit all markets and needs,” said Mr Heins. “It’s a sleek, slim high-performance device.”

One company watcher said it was important for Blackberry to have a device running BB10 on sale in parts of the world where its handsets were still bestsellers.

“The Q5 could be a very significant device for the company because there is a significant opportunity for high-quality low-cost smartphones,” said Adam Leach, devices analyst at telecoms consultancy Ovum.

“However, Blackberry has significant competition in this area with low-cost Android devices and with Nokia’s Asha 501 which sells for just under $100 [£65]. It will be crucial to see if Blackberry can match or undercut that.”