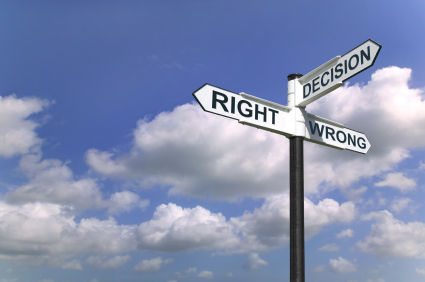 There is so much being written and discussed about the result of the EU Referendum and it’s possible impact that there is a risk we may all start to ignore it. That said, whether we switch off to the background noise or we listen closely hoping to pick up every nuance and it’s potential impact, the fact is we all still have decisions to make.

In my discussions with organisations post referendum it is becoming clear that in certain businesses the impact, or the as yet not clear impact, of the referendum is being used as a reason to delay decisions from being made. In my previous article (Surviving or thriving in uncertain times) I talked about the two main mind sets that may be prevailing.

Here I would like to look a little more at what may be going into decision making to help some of us understand why we may be where we are. Where we are is a lot of people appear to feel they are in an environment where they are afraid to make decisions. Where decisions that they would have weighed up naturally pre-referendum vote are now loaded with an extra emphasis of black versus white or right versus wrong. Where decisions that would have been taken swiftly before the result was announced are not not being taken at all.

Emotion in our decision making cannot be ignored

There is a well known saying in sales which goes something like this “people buy on emotion and they justify with fact.” That is why you will often get very emotional adverts which are backed up with data. Think car adverts. In other words the marketers have picked up that we are essentially emotional decision makers but that we like to have other more rational information to back our gut feeling up.

Whilst there is a certain amount of truth in that assertion the reality is that we are, like a lot of these concepts, all on a continuum that has Rational & Logical at one end and Completely Emotional at the other. The question, though, is how does this play out in the decisions we make?

When I am working through decisions with my clients I introduce a simple four box model which is based upon two simple axis Rational & Fear which are the most common factors we find coming into decisions in varying degrees.

Being a four box model it can have a tendency to put people in boxes which is not the intention. The objective here is to help people work out where they are and what may be playing out in any decision they are making.

Also, being the nature of a four box model they tend to tell you what you already intuitively know. So this is an exercise in making something intuitive explicit with a view to moving our thinking on a little. 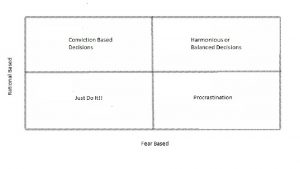 The Rational Based axis is simply how much data and facts are gathered in the decision making process.

The Fear Based axis is how much fear is taken in to account in the decision making process.

This highlights a subject we often cover on our workshops. The acknowledgement of and the space allowed for feelings in our lives. Too many of us are educated and influenced to suppress and hide feelings to a point where it is not healthy. This model allows to acknowledge that we have feelings, that fear is a central one in decision making and that it should not be ignored or allowed to take over.

The key to box four is that  –

I have made very few decision that did not have some unintended impact that I had not accounted for. That’s life, live it!

In Summary unless your business is entirely dependent upon EU funding or EU sales then today and for the next year or two very little is going to change and what changes will come will happen gradually. Getting stuck in our fear of the unknown is to place ourselves in the procrastination box.

The real and present danger is that by procrastinating we will accelerate and manifest the very issues we fear in the first place.

I have used the term “self fulfilling prophecy “in previous articles and this is relevant here. We are the architects of our own destiny, we simply need to acknowledge that and take action.

I’ll finish with a couple of quotes –

“When you have to make a choice and don’t make it, that is in itself a choice”

“Life is the sum of all your choices.”