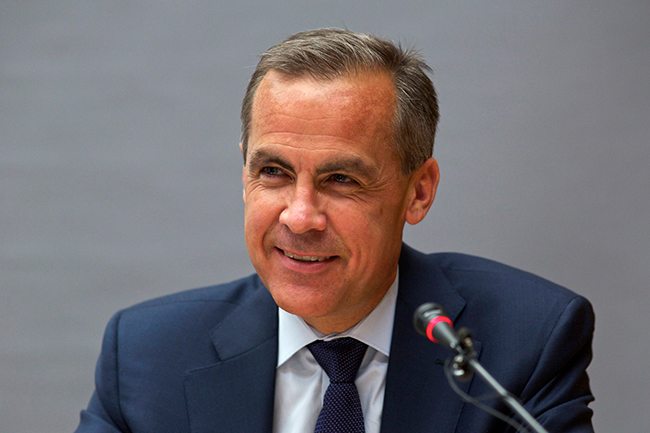 There’s now less than a one in ten chance that the Bank of England will raise interest rates tomorrow.

According to Martin Essex, analyst and editor at DailyFX, the chances of the Bank’s Monetary Policy Committee raising the interest rate from 0.5 per cent to 0.75 per cent have dropped to below 10 per cent. That’s despite the fact that in mid April the chances of this were thought to be as high as 86 per cent.

This reflects both weak UK economic data and comments by Bank of England Governor Mark Carney(pictured), who told the BBC in an interview last month that an interest rate rise is likely this year but that any increases will be gradual.

Since then, official figures have shown that in the first quarter of 2018 UK economic growth slowed to 1.2 per cent year-on-year from 1.4 per cent, its weakest rate of expansion since the second quarter of 2012. Moreover, the purchasing managers’ index for the UK manufacturing sector, a forward-looking indicator widely watched in the markets, fell to a 17-month low in May. The service-sector PMI increased, but by less than analysts had expected.

Most experts now believe that an interest rate rise is unlikely until the summer.

Martin Essex said: “Investors and traders will therefore be listening out for any hints by Carney on Thursday that a rate rise in August is on the cards; currently market pricing suggests the chances are around 50/50.

“Also in focus will be the Bank’s economic projections: whether it is now expecting weaker economic growth or sees the first-quarter slowdown as being due largely to the poor weather in the first three months of the year.

“For the pound, this is crucial. After its recent sharp falls it is now showing signs of stabilising at around $1.35 and it is quite possible that the currency markets have underpriced the possibility of both hawkish comments by Carney and relatively optimistic forecasts by the Bank.

“If so, traders are likely to decide that sterling has been oversold and begin to buy it back, reducing some of the losses since it came close to $1.44 in April before being knocked back by Carney’s comments to the BBC and the weak economic growth figures.”

The Bank of England’s base rate returned to 0.5 per cent in November, after falling to a record low of 0.25 per cent in the aftermath of the Brexit referendum.

Experts had thought the Monetary Policy Committee would vote to put this up to 0.75 per cent this week, with members Ian McCafferty and Michael Saunders having argued of the need to react to inflationary pressures at the last meeting in March.