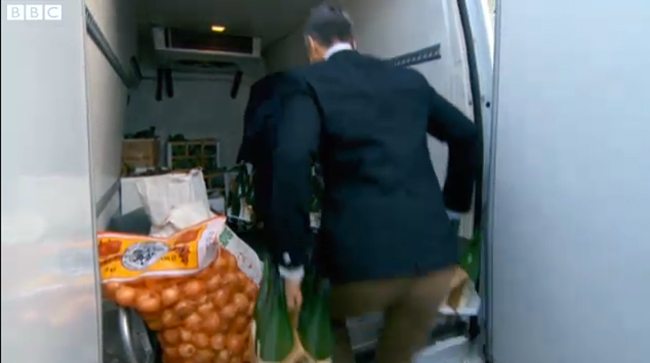 The task was to stock a farm shop in the city; source the produce, stock and display it and then sell to make the biggest profit. Instead of which they reverted to type, jumped on what they knew, and created a shake bar and a jacket potato and soup outfit; clearly not a farm shop in sight, not in its true sense.

Call me an old-fashioned ex southerner ‘up north’ but up here a successful farm shop sells meat, fresh vegetables and produce, home baking and the odd bulk buy products with short shelf lives. I have never bought a shake or a soup from a farm shop and nor would I expect to do so.

This weeks task was dominated by a complete lack of understanding of the task at hand, the inability to listen once more and the two project managers demonstrating just how ruddy rude they really could be.

Louisa’s tone was patronising at best, but appropriately ‘bullish’ when trying to guide Evolve through the muddied fields of buffalo meat products, whilst Neil’s direct approach was not ‘watered’, or milked, down at all when he talked over them ignored attempts to engage with him and make alternate suggestions.

Instead he allowed Kurt to highjack the task for his own means – that of showing Lord Sugar his business idea; milkshakes. To say Kurt was focused is an understatement – bombastic and boastful would be better descriptors.

I know I keep banging on about it but yet again maths played apart. No budgets were given to assist the sub teams, and Alex looked like a buffoon (or buffalo) when he failed to calculate the mark up and best price for milk in front of the supplier, even after boasting he was from Wales (like that made a difference?) and he would dress like a scarecrow if needed (each to their own I guess, but not sure how that would have helped? Sadly we didn’t get to see that!)

Instead the only dressing up were the girls pigtails and their extraordinary heels when trying to sell farm produce; because after all that’s realistic right? Killer heels in the farm yard?

When the results were announced Jordan’s ‘get in’ marred his otherwise impressive performance and he was suitably chastised by Lord Sugar for behaving like he was at a football match. His cry was for Evolve’s success with the shop ‘Buffalocal’ who pipped ‘Fruitycow’ to the post by a mere £91. However Louisa’s smug look was wiped off when Lord Sugar told her she was lucky and had she team to thanks for that result. I have to admit I didn’t want either team to win to be honest, I felt neither deserved it as they didn’t fundamentally met the remit – it wasn’t a farm shop as we know it.

So Neil entered the boardroom with Uzma and Kurt after a clear division in the team – half saying he was a good leader and the other half saying he gave no direction or budget, that they sold only half the number of shakes Kurt had said they would and none of the produce itself. Uzma was told she could have been absent for all the contribution she made, for the third week (did they not see how hard she worked at wearing those sky high heels while selling a tray of blackberries?!) and Kurt was told his attempt to pitch his idea to Lord Sugar had miserably failed though the lack of sales he delivered.

He may have put his neck on the line and tried, but sadly he failed; end of.Uzma was dispatched for failing to do… well anything. Stating in the car we hadn’t seen her fire was as great an example of ‘too little too late’ as I have seen for some time.

Neil’s cockiness and Kurt’s over confidence live to see another day, another episode. Isn’t it time we had the girls step up and lose a chap? Surely they can stop bickering and pouting long enough to show us what they are really capable of? Otherwise the final teams will be all men. Women are apparently supposed to be better at listening and engaging on a people/personal level. Let’s try a bit more of that and maybe they will succeed? So what do you think?