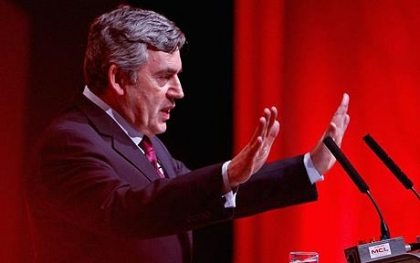 Unfortunately the one thing Gordon Brown is not, is a leader.  He has no ability to understand what PEOPLE want to hear.  Yes, he knows what they need and what they should hear, but not what they want to hear from their leader – traits that would cause difficulties were he to run a business.

This week’s speech was given to an audience that was desperate for him to do well.  They were looking for a reason to cheer and applaud him.   He went for the traditional framework of, look how good we have been, attack the opposition and then promise them something. In fact Gordon Brown held it together and this was probably one of the best he has done.  He is not a showman and presenting to a crowd is not his strength.

However, talking about successes always comes over cheap and a business leader knows that if you are going to talk about the successes, then be sure to give praise to those that did a great job otherwise it sounds like self gratification.  There was a couple of moments where praise was given, but making reference to Tony Blair was the wrong person especially when Gordon Brown cannot speak about him without giving away his resentment.

His attack on the Conservatives and, Cameron in particular, is normally where Gordon Brown is at his best – this was no exception but people are bored with it now.  At a time when we need to build a new future, being good at tearing the opposition down is not a good quality.  Leaders in both business and politics focus on the future having learnt from the past.  When he attacks with such passion, it reminds people sub-consciously of his track record; of being a bit of a bully; and being aggressive and demanding.

A leader should never appear in the minds of the listener as someone who is prepared to push blame onto others.  Saying “he would have done no better” is too close to “it is his fault”.  People do not respond to hate very well because they link it to fundamentalism and irrational behaviours.

The saddest part of the speech was his plans for the future.  There was, what seemed like, a barrage of things that he planned to achieve by the end of the next term.  Whilst every one of the ideas he suggested were wonderful and appealed to the Party faithful, they seemed weak at a time when Britain is screaming for some clear direction.

Leader in all walks of life, but particularly business must show strength of character in areas that are important.  At this moment it is important to get Britain back in the race and make a contribution to the world so it can make a profit.  What will be the focus in the next 10 years under Labour?  More money on social initiatives however well meaning is not what was needed at this time.

This speech confirmed what we have known for a long time, Gordon Brown is a ‘manager’ and not as a ‘leader’, which has always been his problem.  He will probably be more successful as a politician after he leaves Downing Street than he was while he was there.  Whatever else, he should never lead a business!