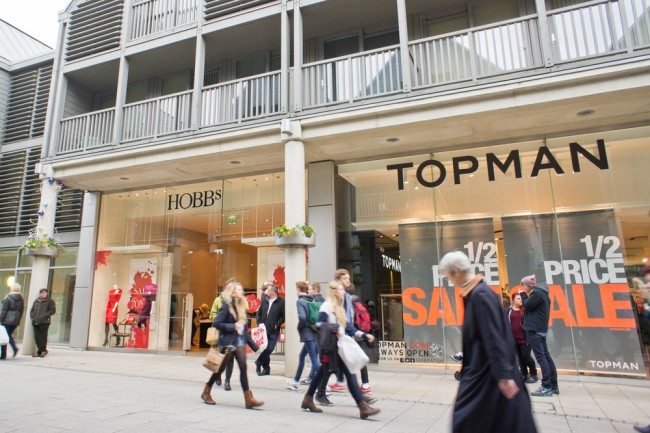 Underlying sales, which exclude new store openings, slipped by 1.1 per cent in July according to The Guardian, meaning stores have seen three consecutive months of decline for the first time since 2009. Sales fell by 0.9 per cent in May and 2 per cent in June.

Fashion retailers suffered the worst problems, according to the survey of 85 mid-sized retailers including French Connection, Oasis and Hobbs, with sales at high street stores down by 1.4 per cent. Homewares sales fell by 1.1 per cent, a surprise given the buoyant housing market.

Sophie Michael at BDO said some fashion retailers had tried to cope with the chilly start to the summer by launching their summer sales earlier than normal, only to be hit by a slump in consumer confidence with the economic chaos in Greece. But those who chose to delay until August did not fare much better.

“Consumers remain cautious with regard to spending: the political landscape is still cooling after the election, and speculation over interest rate rises continues to create uncertainty,” Michael said.

She said shoppers were indulging in “selected spending” at restaurants and bars, rather than on homewares and fashion.

The figures are disappointing for retailers who endured a tough autumn last year when the weather was unseasonably warm and a tricky start to the spring, which was much cooler this year than last.

Shoppers’ continued caution comes despite an increase in disposable income this year. Some are choosing to spend money on “big-ticket” items such as cars or holidays, that they may have previously held back on.

But the chancellor’s changes to tax credits and other benefits, announced last month, as well as expectations that the Bank of England must raise interest rates before too long are also thought to be weighing on consumers’ minds.

The BDO figures reflect a big dip in consumer confidence last month, according to the regular GFK survey, while the number of shoppers visiting the high street slid by 1.1 per cent between April and June, according to the British Retail Consortium.

Jamie Merriman, an analyst at Bernstein Research, said fashion retailers were less likely to benefit from any improvement in the economy because they had not suffered as much as other businesses during the recession.

“What we have heard from retailers so far is that summer has been a bit mixed. When we have volatile weather it’s never a surprise to have clothing sales,” she said.

However, Merriman said retailers that had a flexible supply chain and had made the right calls on trends and discount activity were still likely to have done well.

Next, for example, increased its profit expectations for the year by 2 per cent last month after warm weather helped to boost sales in July.

“Good retailers will outperform in this situation. They are not immune to the weather but tend to do better,” said Merriman.

Mike Shearwood, chief executive of Karen Millen, said fashion retailers were also fighting to deal with a dramatic change in the way people shop. Whereas in the past, people would visit several stores and try on a variety of outfits before making their choice, increasingly shoppers pick what they want online and head straight for a particular shop – cutting down the opportunities for retailers to entice them to buy other things.

“There has been a huge change in shopping habits,” said Shearwood. He added that retailers had also tried to cut back on discounting this summer, and this had not paid off for every chain. “This season has been mixed,” he said.