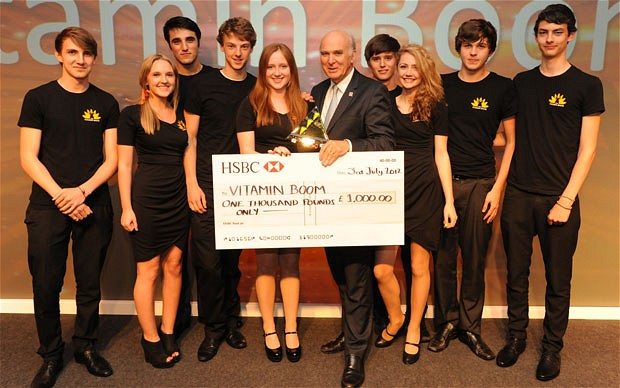 The Vitamin Boom, a business founded by a group of 16-17-year-olds from Balcarras School, a Gloucestershire comprehensive, won a £1,000 prize presented by business secretary Vince Cable for their health drink, reports The Telegraph.

Manufacturing was completed by a local business, Bensons Apple Juice.

Cicely Elliott-Berry, managing director of The Vitamin Boom, said the business has won orders from a number of independent retailers and is in negotiations with larger stockists.

Ms Elliott-Berry, 16, first heard about the health benefits of baobab – which is high in vitamin C, calcium, iron and potassium – from her brother, who was working in Africa.

“We decided that the health benefits of it would work in the food and drink market, saw that the tea market was huge and thought something about the Britishness of tea would work well with an exotic fruit.”

She added that her team liked the fact that the fruit can provide a sustainable income for African farmers, and that they could make the ethical sourcing of ingredients part of their company’s story.

“It’s a sustainable income – it’s all freelance farmers rather than plantations. We think we should trade ethically and it’s part of our story to do it all the right way.”

One of the toughest challenges was establishing a “border” between “business and school”, she said.

“We might disagree on something and then we’ve got to sit together at lunch the next day. It was just a case of being firm with each other but we’re close friends so we all got stuck in and helped each other out.”

She said the team had learnt many business skills from working with customers and suppliers and the experience has “helped confirm” her desire to be her own boss.

The group will now represent the UK at a European Young Enterprise final in Romania in July, while watching her team go to university won’t necessarily mean the end of The Vitamin Boom, she insisted.

“I’d like to keep going – we’ll use university to spread the business across the UK.”

Nebula, a team from Colston’s Girls’ School in Bristol, won The Daily Telegraph-sponsored Young Enterprise New Media Award for the video promotion they produced for Shooting Stars, a children’s “grow your own herb and vegetable kit with a recipe activity book”.

Mr Cable said: “It’s encouraging to see so many young people setting up small businesses, as it gives them the skills they will need to pursue new opportunities and help achieve their own business ambitions.”

The annual scheme is run by Young Enterprise, a charity which promotes links between schools and industry.