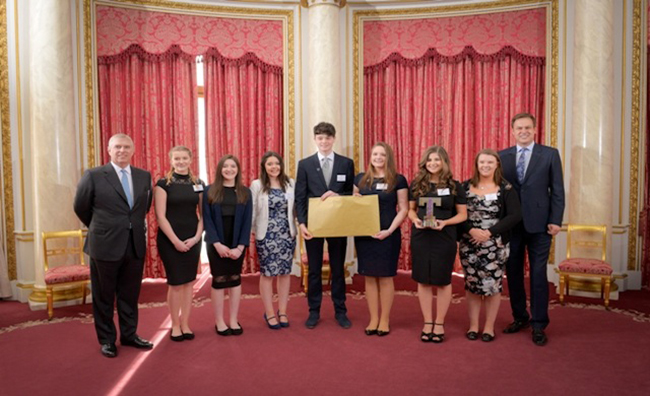 Dragons’ Den star Peter Jones CBE has awarded a group of sixth formers from The Tavistock College as the winners of annual nationwide youth enterprise competition Tycoon in Schools 2015.

The group were presented with £1,000 prize by Jones and HRH The Duke of York during a ceremony at Buckingham Palace for their winning business Tyre Fires of Tavistock; a range of fire pits made from two wheel rims welded together.

After sourcing and negotiating a price for materials from a local scrapyard, the seven pupils raised £1,327.56 in the seven-week trading period by marketing on social media and selling the products at local events.

Jones commented: “The pupils behind Tyre Fires of Tavistock took on a very ambitious project and executed their plan brilliantly. Their product is exciting, they clearly have excellent negotiation skills and they’ve made a good profit.

“This has been our most successful year to date, with over 2,000 students taking part, which makes the winners’ achievement even more special.”

Phoebe Sanders, a member of the Tyre Fires of Tavistock team, added: “I’m not really sure whether to scream or cry. It’s just overwhelming – it’s not settled in yet. We’d like to congratulate every team that took part and thank the teachers that have helped us throughout. We really did not expect to be the overall winners.”