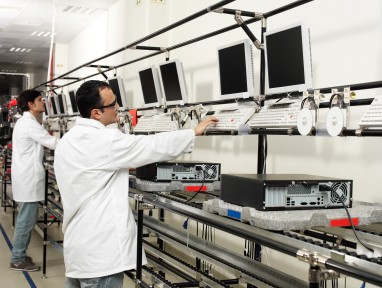 However, the report warned that the increase in output was heavily supported by a depletion in backlogs of work and record inventory building. Cost inflationary pressures were also intensifying due to high oil and metal prices.

Rob Dobson, senior economist at Markit, said: “UK manufacturing has made a brighter than expected start to 2012, with PMI data pointing to output growth of around 0.3% in the first quarter. This is obviously nowhere near a strong pace, but it is at least sufficient to prevent the sector from remaining a drag on broader GDP growth.

“Inflows of domestic and export orders also showed some improvement in March, but exporters are having to tap markets further afield as conditions in the eurozone remain lethargic.”

David Noble, chief exec at the Chartered Institute of Purchasing & Supply, said “continued growth over the past few months pointed towards a more sustained period of improvement in the sector, and less chance of manufacturing acting as a drag on the overall economy.”

At the manufacturers’ organisation EEF, chief economist Lee Hopley said the stronger than expected data showed a bounce back in manufacturing. “Despite further evidence of weakness in eurozone markets,” she added, “UK manufacturers are looking beyond this and securing orders growth in non-traditional emerging markets.

“However, managing high and volatile raw materials prices has been a particular challenge through this recovery and, a return of accelerating input price inflation is a potential cause for concern.”