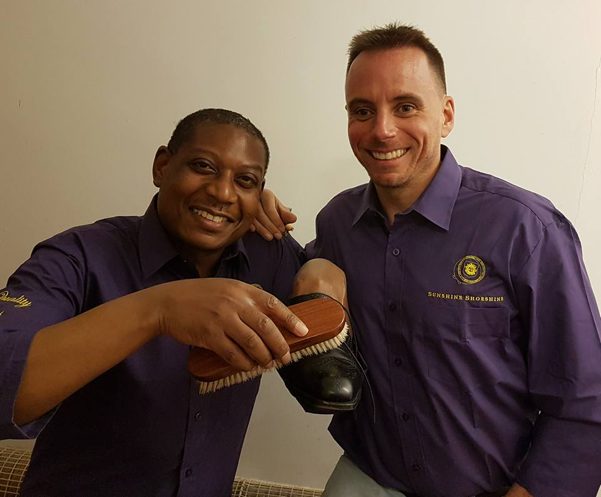 Over the past five years the social enterprise has helped around 40 Londoners get back into employment.

Many of those helped had found themselves out of work after suffering mental health or social problems and others were homeless or had come to the UK as asylum seekers.

The enterprise was founded by Drew Goodall who himself suffered a spell of homelessness after a career as a West End actor failed to take off.

He spent six months on the streets in the 1990s after harsh reviews caused him to quit the stage and subsequently lose his home.

But after buying a set of brushes and some boot polish he began offering to shine shoes for £2 a time and gradually began to rebuild his self-confidence.

Then in 2012 he began employing others in need, helping them move on to other employment when they were able.

He currently has a team of eight Sunshiners and an impressive list of blue-chip City-based clients, including several banks and financial institutions.

Over the past five years he’s helped around 40 people to turn their lives around. These include 45-year-old Alan Walton from Richmond. Alan had suffered with mental health issues and had left school with no qualifications leading to a 15 year spell of unemployment.

He also suffered with bad eyesight caused by extreme myopia and cataracts but was able to pay for private eye surgery after saving his Sunshine wages.

He said: “I was born practically blind with extreme myopia. I was put into care when I was three because of my parents’ inability to deal with my worsening eyesight. Life was very hard for me as there was a very real possibility that I would go completely blind by the time I reached 10 years old.

“I was bullied relentlessly at school and throughout my life. This only stopped happening recently when I saved money from Sunshine to pay for medical treatment.  I now function with almost perfect eyes.

“The act of cleaning shoes was initially tricky, but everyone was really patient and I picked it up. The real challenge for me as someone who had, had no interaction with everyday life was to integrate into working society, dealing with people.”

He said his proudest moment as a Shoeshiner came when he was promoted to office administrator.

“I had long held the ambition to work with technology and the internet, this role was a real game changer for me. It fulfilled my life time dream.”

Drew said he enjoyed helping Alan and the other Sunshiners to get their lives back on track while at the same time raising cash for charities such as Marie Curie Cancer Care, RNIB, Oxfam and the British Heart Foundation.

He said: “London can be a tough town and anyone can have a run of bad luck. I know from personal experience how difficult it can be to get your life in order if the wheels fall off.

“I spent six months on the streets when I was younger and it was only through shining shoes that I managed to rebuild my life.

“There’s something incredibly therapeutic about the act of shining shoes. It’s a fast process and there’s definitely something in the Karate Kid wax on, wax off thing.

“It started out as a means to get some money in my pocket but it’s progressed to a thriving business and a way of helping others.

“I’m very proud of Sunshine Shoeshine and of all our incredible Sunshiners. It’s very rewarding to make a real difference to other people’s lives.”

If you’d like to hire a Sunshiner to visit your office and polish the team’s shoes please visit SunshineShoeshine.com or call 020 7183 4746.