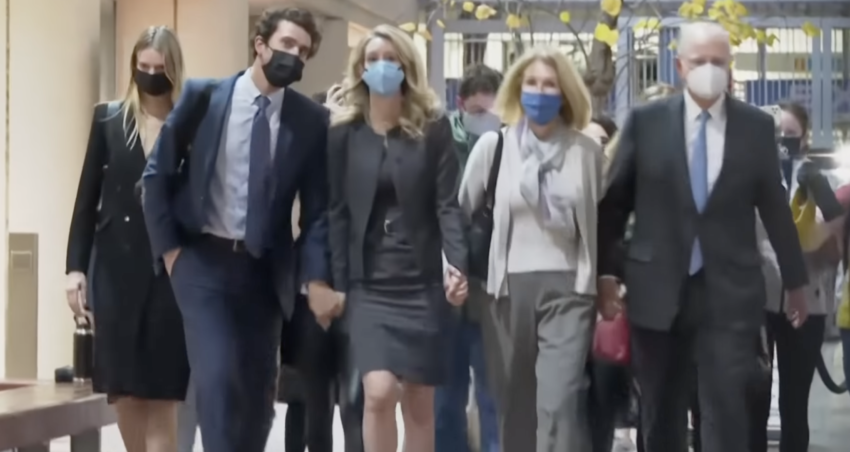 Elizabeth Holmes, founder of Theranos, has been found guilty on four of 11 charges of fraud, concluding a high profile trial that captivated Silicon Valley and chronicled the missteps of the now-defunct blood testing startup.

The jury found Holmes guilty of several charges – including conspiracy to defraud investors – following a dramatic day in which jurors said they remained deadlocked on three of the criminal counts she faced.

On Monday, the seventh day of deliberations, the jury told US district judge Edward Davila that it was unable to reach to reach a unanimous verdict on those three charges. In response, Davila encouraged them to deliberate further, but jurors later returned and rendered their final decision.

As the verdict was read, the Theranos founder bowed her head, remained seated and expressed no visible emotion. Her partner, Billy Evans, showed agitation in earlier moments but appeared calm during the verdict reading.

Holmes was found guilty on four charges: one count of conspiracy to defraud investors, and three counts of wire fraud against investors.

Holmes was meanwhile acquitted on three charges, including one conspiracy to defraud patients and two charges related to patients who received inaccurate test results. One charge was thrown out earlier in the trial, and the jury did not come to a verdict on the remaining three charges.

The verdict seals Holmes’ extraordinary rise and fall and could have wide-ranging consequences for the tech industry. It also marked an indictment of the hype machine that helped rocket Holmes to fame, as she graced the covers of major magazines, headlined conferences, and drew comparisons to Apple’s Steve Jobs.

The split verdicts are “a mixed bag for the prosecution, but it’s a loss for Elizabeth Holmes because she is going away to prison for at least a few years”, said David Ring, a lawyer who has been following the Holmes case closely.

Holmes, 37, faces prison time, although a sentencing date has not been set. She pleaded not guilty and is expected to appeal.

After the judge left the courtroom to meet with jurors individually, Holmes got up to hug her partner Billy Evans and her parents before leaving with her lawyers.

Holmes founded the company after dropping out of Stanford at 19 years old, promising a revolutionary technology that could run hundreds of health tests on just a drop of blood. But the company ultimately fell short of its ambitious pledge.

Once a charismatic figure, Holmes was initially hailed as a visionary. As Theranos grew, the company attracted big-name investors.

Her wealthiest and most high profile victims include Rupert Murdoch, who lost $125m and the DeVos family – including Trump-era Education Secretary Betsy DeVos, who invested $100m.

But cracks in the glossy surface began to show in 2015 when Wall Street Journal reporting revealed that its in-house tests had massive inaccuracies, and that the company was performing other tests using traditional blood drawing methodology and outside labs.

The fall of Theranos has been followed with perhaps even more fervor than its spectacular rise, inspiring multiple documentaries, a feature film, and an upcoming television show. Starting in late August, throngs of reporters have lined up in the early morning hours for a seat inside the federal court house in San Jose, California.

During the trial, prosecutors painted a picture of Holmes as a strict, power-hungry leader willing to go to any lengths to save her company’s image, repressing internal and external dissent and manipulating the press.

“She chose fraud over business failure,” prosecutor Jeff Schenk said in his closing arguments. “She choose to be dishonest with investors and patients. That choice was not only callous, it was criminal.”

As witnesses, the prosecution called forward Theranos lab directors who testified that their concerns over the technology’s shortcomings were largely ignored. Meanwhile, investors such as the former US secretary of defense James Mattis said he and others were discouraged from scrutinizing the company for fear of missing out on opportunities.

The defense team for Holmes sought to counter that image by portraying Holmes as an ambitious entrepreneur who did not knowingly commit fraud, but rather did not understand the shortcomings of Theranos’ complex technology.

Those arguments came to a head when Holmes made the stunning decision to take the stand in her own defense, arguing she made decisions in good faith and did not knowingly commit fraud.

Prosecutors repeatedly pointed to documents that Holmes admitted to doctoring before sharing with potential partners, adding the logos of pharmaceutical firms and falsely implying they had endorsed the methodology.

“I wish I hadn’t done that,” she told the jury on the stand. Her defense team stated in closing arguments that the logo evidence was “a distraction” and that Holmes was in talks with those companies at the time.

Her attorneys also put forward a line of defense that Holmes was abused by her former romantic and business partner Sunny Balwani, who served for ten years as co-president of the company.

“There was another side of Holmes’s relationship with Balwani that the public never saw,” said defense attorney Lance Wade in opening arguments, adding that “trusting [Balwani] as her primary adviser was one of her mistakes”.

Some of the most powerful moments in the trial came when Holmes testified directly about Balwani’s alleged abuse, growing emotional as the prosecution called on her to read their romantic texts. She claimed he controlled what she did, who she spent time with, and even what she ate in an effort to turn her into a successful CEO.

Balwani has strongly denied claims of mistreating Holmes. He faces his own trial in 2022 for fraud.

Holmes did not respond to questions lobbed at her during a walk from the courthouse to the nearby hotel on Monday where she has stayed during jury deliberations.

In a written statement, the US attorney Stephanie Hinds thanked the jury for navigating the case through the pandemic and said Holmes must now be held “culpable” for her crimes.

Holmes will remain free on bond while awaiting sentencing, which will be determined by the judge.