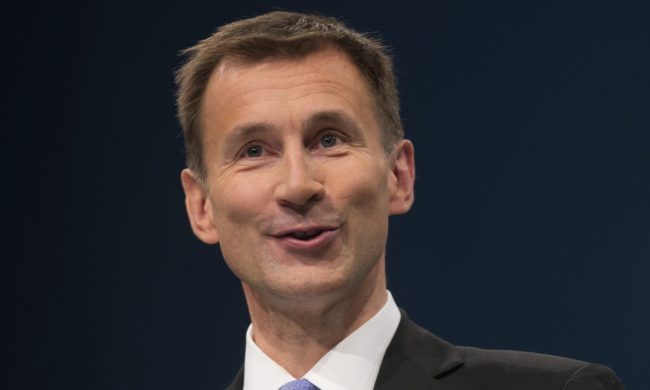 Mr Hunt owns nearly fifty per cent of Hotcourses, an education listing company which he set up with business partner Mike Elms more than 20 years ago.

The firm is this week set to announce that it has been sold for a sum between £30million and £35million, Sky News reports.

Mr Hunt’s involvement in the company is disclosed in the latest register of members’ interests.

A legal source said a deal was close to being completed, according to Sky.

Documents at Companies House reveal Hotcourses had a turnover of £10.6million in the year ending July 31 2015, a 12.2 per cent decrease from the previous year.

Mr Hunt resigned from having an active role running Hotcourses after he became MP for South West Surrey in 2005.

But he has retained 48 per cent of shares in the company which was founded in London in 1996 as a an educational print magazine, and has since grown into a huge worldwide database.

Mr Hunt set it up when he returned to the UK after teaching English in Japan.

In 2000 it launched its first website, Hotcourses.com, carrying details of 50,000 UK courses.

Two years later it launched the Education UK website for the British Council, and acquired Schoolsnet.com in 2003.

In 2006 it opened an office in India, and two years later an Australian operation was added to its portfolio.

It now employs more than 300 people in offices in the UK, Europe, North America, Asia and Australia.