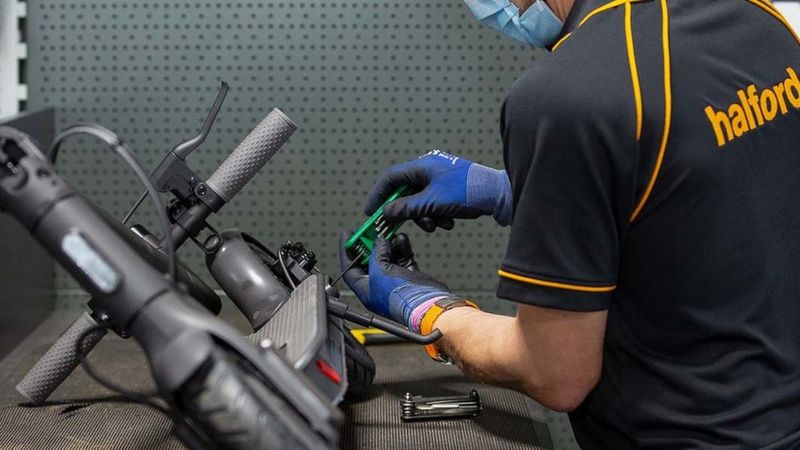 Halfords is training 1,500 extra technicians to work on electric vehicles, bikes and scooters as it prepares for the switch away from petrol cars.

The cycles-to-vehicle servicing group said it expected to hire hundreds of new staff and to retrain existing employees so that it would have 100 more electric car technicians next year, bringing the total to 470, and 1,400 extra electric bike and scooter technicians in addition to the 400 now in place.

“We are looking at very significant growth in our skills and capabilities to service electric bikes, cars and vans in the next four to six months,” said Halfords’ chief executive, Graham Stapleton.

The shift comes after six months in which Halfords’ sales of electric bikes and scooters almost tripled and demand for servicing hybrid vehicles climbed by 78%.

Total sales at the group – which has 443 stores, 367 garages and a fleet of 105 auto servicing vans – increased by nearly 10% to £634m. Profits doubled to just over £55m but the group has closed 33 stores in the half-year, including all 22 Cycle Republic outlets. It plans to close up to 47 more stores and garages by the year-end as it tries to cut costs.

This week’s confirmation of the government’s plan to ban fossil fuel vehicles from 2030 and of a further trial of legalising the use of e-scooters on the roads, as well as hopes of a government subsidy on electric bikes, are all expected to boost demand for electric vehicles (EVs).

Stapleton said the industry would need to double the number of EV technicians it was training each year to ensure it could service an expected 11m hybrid and electric vehicles on the roads by 2030.

He said Halfords already had the training programmes in place but would need to bring more staff in as “we don’t have all these skills and capabilities within the business”.

Stapleton said demand for e-bikes and traditional cycles was expected to remain strong through the year, although sales might be held back by a global shortage of supply.

Halfords’ sales of bikes and related kit jumped 54% in the half-year but Stapleton said sales could have been higher if more stock had been available. He said the company had turned to new brands and additional suppliers in Europe for its own-brand bikes to try to keep pace with demand.

He said that Halfords had ample stocks of children’s bikes for Christmas, as that sector of the market had not been so overwhelmed with demand as that for adult bikes.

He admitted: “We are not in full supply on adult bikes but we have got stocks of the bestselling lines.” He said the company was importing 20,000 to 30,000 bikes each week and expected high demand to continue into 2021.

“A lot of families have got back into cycling and bought good-quality bikes they will want to keep using. There is a shift to bikes being part of essential travel, not just leisure,” he said.

He said a general shift away from public transport during the pandemic was also likely to benefit Halfords’ car servicing and parts business.