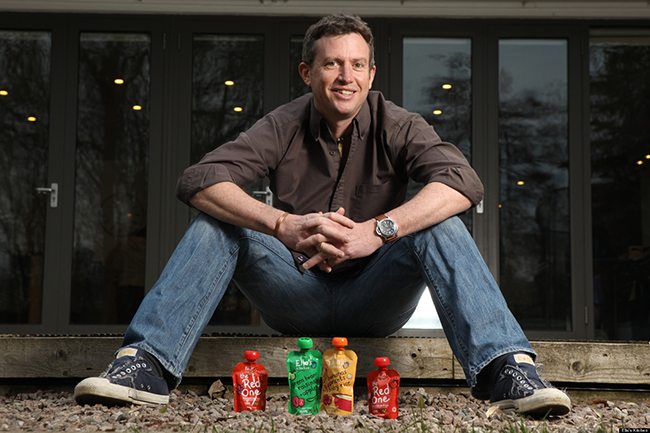 Ella’s Kitchen was set up in 2006 from Lindley’s home near Reading after he experienced problems getting his eldest daughter to eat.

Prior to starting Ella’s Kitchen Lindley had initially worked at KPMG for five years and trained as a chartered accountant. A role which he says that he didn’t enjoy it at the time, but it’s helped me with the new business.

Then in the 1990s I worked in the media division and left to work for Nickelodeon in 1994. I was initially hired as the financial controller and worked my way through to being the general manager.

Lindley then said that he actually rejected two ideas before settling on Ella’s Kitchen; the first was a platform that would give kids access to digital money to spend online, the second was a TV show – which he actually made the pilot for – which dealt with issues around promoting healthy food, family time and food and so on, but the interest in Ella’s Kitchen soon took over.

To fund the development of the ‘fun, healthy, organic food for babies and toddlers’ Lindley remortgaged his house to the tune of £200,000 and started two years of research with two products and one customer, Sainsbury’s, the supermarkets group.

Today the company has a turnover of £50m and has helped grow the baby food sector during a recession. However Lindley is clear that “The goal was never to sell the company,” he says. “Nor was the goal ever to make ‘X’ amount of profits or ‘X’ amount of sales. The goal was to use our products to improve children’s health.”

The sale two weeks ago to the Hain Group came when he decided after looking at options such as private equity and bank funding that it was the best way to realise the company’s ambition of increasing what it calls “tiny tummy touchpoints” – servings of its organic fruit and vegetables.

“When I launched the company the baby food market was very functional at the time,” says Lindley. “It hadn’t changed. There had been no innovation in that market for a generation.

“There were a few big brands. The food was in glass jars. The branding and reasons to buy hadn’t changed, even though people’s lifestyles had fundamentally changed.”

He decided the company would be different by making it’s USP that it put children first. The business innovated with recipes and flexible pouches as Lindlay sought to inject into the product the fun of having his now six-year-old daughter, Ella.

“I wanted to use emotion in the brand,” he says. “Consumers are at the most emotional point of their lives when they have a baby.

“I wanted to work with that emotion and the benefit of being a small entrepreneurial company and use my own family as an experience people could relate to, in contrast to the less personal big brands we were competing against.”

Today Ella’s Kitchen employs 60 people near Henley-on-Thames. It has 80 products and nearly 20 per cent of the UK market, putting it behind Danone’s Cow & Gate and Heinz. The firm has supplier deals with all the supermarket groups and exports to 12 countries, including Norway, where it has a 30 per cent market share. This suggests that a baby is eating an Ella product every second of every day somewhere around the world.

Hain, which is quoted on the Nasdaq, will combine Ella’s Kitchen with its Earth’s Best brand, which pioneered organic infant foods in the US and has a 15 per cent share of the US baby food market. It comes in behind Nestle’s Gerber, which has about 60pc. Mr Lindley will become chief executive of Hain’s global infant, toddler and kids division and says he believes it can increase the combined number of sales to 4bn or 5bn a year globally.

“One of the most important things in business is timing,” he says. “Timing around an exit and around your next move is a skill and something people should think about as a core part of business.

“I think we have timed this perfectly. It’s right internally. And when you look at the marketplace in America, there are a lot of small players [so] there will be consolidation. You don’t want to be the bridesmaid at the end when everybody else has consolidated. You want to pick the best partner for you.”

Lindley is selling all his shares to Hain and is not locked in for a set period or incentivised by an “earn-out” arrangement. He says he is motivated by developing the business for the long term. He says: “I’m staying on because I believe that the opportunity for me and my team in the UK to run a business with a turnover that’s not £50m to £60m but more than £200m, can seriously make inroads into improving children’s health around the world. I believe we can continue to innovate and produce better products for babies, toddlers and children.

“It’s a humbling thing – the world’s first organic baby food [business] and a significant part of a major public company in America is being put in the hands of a British entrepreneurial team that has grown its business from nothing in seven years.