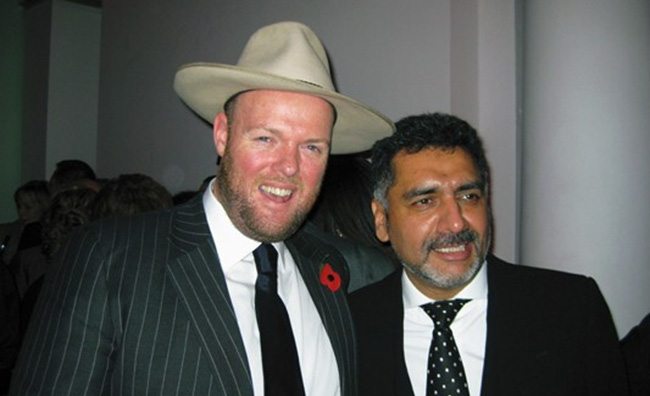 Flamboyant PR adviser Richard Hillgrove who failed to pay a £100,000 tax bill and spent the money on school fees, luxury holidays and parties has avoided jail as was given a suspended sentence after arguing that he cannot run his business from prison

As we reported at the time, Hillgrove, who has worked for figures such as Charles Saatchi, Dragons’ Den stars Duncan Bannatyne and James Caan as well as musician Sting, was found guilty in March after denying two charges of cheating the public revenue, of not paying VAT, income tax and National Insurance taking the money for himself.

However, he walked free from court today after being given a suspended sentence and told to pay just £5,000 towards the costs of his prosecution.

Hillgrove, the owner of Hillgrove Public Relations, and former columnist for Business Matters, failed to pay HM Revenue and Customs £52,268 of VAT charged to customers of his company, Bristol Crown Crown Court heard.

He also deducted £44,846 in taxes from the wages of his employees during the same period but failed to pay it to HMRC spending the sums on  ‘extravagant’ purchases such as expensive restaurant meals and the fees at leading public school Millfield.

The jury was told during his trial that he ‘failed to grasp’ his company’s ‘cash flow issues’ and continued to withdraw too much money ignoring repeated warnings from his accountants – brought in to help repay debts from a previous business – and told them to ‘hold fire’ on sending tax returns.

Recorder Robert Linford today sentenced him to 15 months imprisonment, suspended for two years, and ordered him to pay £5,000 towards prosecution costs and complete 200 hours of unpaid work.

‘It is quite clear from the perusal of your bank accounts you were servicing a lifestyle that you simply couldn’t afford,’ the judge said.

‘I have no doubt at all that the desire to keep customers sweet explains some of the extravagant spending. It does not explain the trip to Madeira or the expensive 30th birthday party for your wife.’

The judge said Hillgrove’s defence during his trial had been ‘unpleasant’ at times, adding: ‘This was not a conspiracy against you. To suggest that it was is ludicrous.

‘You need to rebuild your life and pay the Government what you owe them.’

Mr Linford also warned Hillgrove that he would be under added scrutiny from HMRC in the future, and would face dire consequences if he ever ‘fouled up’ again.

During the trial, prosecutor Joss Ticehurst said Hillgrove should have ‘trimmed down’ his spending to pay the taxman but failed to do so – as he never intended to hand over the money owed.

Hillgrove told the judge he was working in London five days a week to pay his overheads of £18,000 per month.

‘I have always done ringing the newspapers and getting people who want to be on television and get their stories across,’ he told the judge. ‘I can’t do that if the sentence is custodial.’

Hillgrove originally told us that he intend to sue HMRC in an interview with Business Matters and stated that he would appeal the initial judgement, however it is not known if he will proceed with that at this stage.