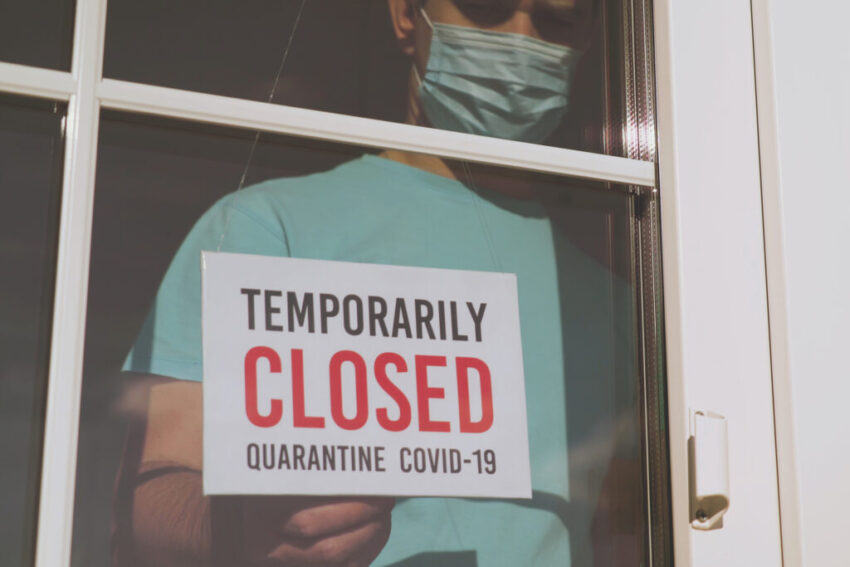 A wave of “zombie companies” kept afloat during lockdown are on a cliff-edge going into the autumn, experts say.

Analysis shows a surge of firms went bust in March, then the rate slowed in the first few months of lockdown amid a £160bn support package.

However, the Institute for Fiscal Studies (IFS) says many firms have piled on debts and will struggle.

The government said it would “adjust support” as the economy reopens.

So-called zombie companies are businesses that function day-to-day, but cannot pay off the full debt they owe or find cash to invest and grow.

Julie Palmer, a partner at the financial consultants Begbies Traynor, said: “This crisis will force many zombie companies out of business.

“While these were clinging on to survival prior to the pandemic, many will now have become simply unviable due to high levels of debts and poor sales.”

Stuart Adam, from the IFS, said: “Many firms have been tided over during the period of hibernation partly through loans and tax deferrals, but those mean piling up debts that will make it harder for them to carry on in the longer term.”

Insolvency notices have slowed from April

The BBC Shared Data Unit looked at how many companies had posted insolvency notices in the London Gazette, the official paper of record for public notices. A company is insolvent when it can’t pay its debts.

Our investigation found there was a spike of 4,200 insolvencies in March as the UK headed into lockdown.

The rate of insolvencies slowed over the next three months, with a further 5,000 businesses insolvent – a drop of 23% compared to the same period last year.

As well as government support, it is thought changes to insolvency law and reduced court services have contributed to the slowdown.

Firms in the information and communication sector saw the largest increase in insolvencies.

Business owner Richard Millward is working as a driver for a supermarket while he watches his long-standing firm run out of cash.

For 30 years, he has worked in the events industry, putting on large-scale gatherings such as the London Marathon.

He is currently working as a driver for Waitrose, with no prospect of events income until at least April next year.

His business has benefitted from the furlough scheme and a business rate relief grant – part of billions of pounds in government support and legal changes to help firms cope with Covid-19’s impact.

But his company of 17 years has ongoing costs and Richard is facing the choice of holding on, or closing it down before it runs out of money.

He knows of several companies that have gone into administration or already closed down.

“It’s sad and also quite worrying,” he said.

“We’re going to lose an awful lot of the skill, the talent pool that we have. I think a lot of people are just trying to hang on for as long as possible.”

Commenting on a huge rise in “zombie companies” Douglas Grant, Director of Conister Finance & Leasing Limited, said: “We are facing a significant double dip recession that could last well into late 2021 and the economy will be hurt by both SMEs closing and mass redundancies for a significant part of the workforce.

SMEs are not just the lifeblood of the economy, it is where innovation and creativity happens. Since 2008, alternative lenders have risen in prominence, working alongside larger more traditional clearing banks, offering a funnel of vital liquidity through tailored and flexible lending solutions to SMEs.

Today there are significant amounts of private capital waiting to be invested in resilient SMEs and the market share of clearing banks has fallen significantly in a far more diversified lending sector. In the last 12 years, banks have also become much better capitalised than during the Global Financial Crisis. Previously businesses could service debt from remaining cash flows with little or no capital for investment which resulted in a zombie status for many UK SME borrowers.

It appears this dangerous trend is re-emerging and according to The City UK, it is estimated that businesses may build up £100 billion of debt by next March which they would be unable to repay with 780,000 SMEs in danger of insolvency.

“Since the epidemic took hold, the UK Government has been quick to back sectors that are resilient to recessions and market volatility, providing financial security and protection through initiatives such as the bounce-back loans scheme.

It is imperative that SMEs have a tripartite level of sustainable support from Government, alternative and traditional lenders working together to identify and protect the more resilient sectors such as infrastructure, technology and renewables, ensuring their existence guaranteed.

This is where alternative lenders that understand the characteristics of specialist SMEs and with the flexibility they offer, empower their staff to make judgement calls on capital requirements often in the infancy stage of lending, can provide the additional support and natural lending progression alongside the larger clearing banks. Larger clearing banks will not be able to keep the UK SME sector alive by themselves.”