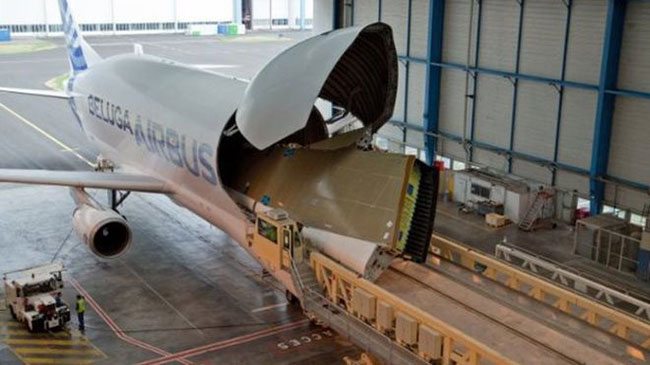 On a visit to the Airbus factory in Broughton, the Chancellor of the Exchequer welcomed news that UK Export Finance’s recent move to add the Chinese currency Renminbi (RMB) to its list of supported currencies has immediately paid off, enabling the purchase of a single Airbus A330 aircraft by China Southern Airways.

The historic deal is the first by an export credit agency anywhere in the world for a loan in Chinese offshore RMB and paves the way for enormous opportunities for UK exporters and companies in the supply chain.

The Chancellor was joined by the Secretary of State for Wales, Stephen Crabb on a tour of brand new Beluga Line Station in Broughton, a facility that has just opened and which marks the latest in over £2 billion investment in manufacturing at Broughton, securing the future of thousands of jobs in Wales.

The visit came just over a week after the Summer Budget, which built on the progress made in the last Parliament to lock-in a sustained recovery in Wales.

Chancellor of the Exchequer, George Osborne said: “This is a truly historic deal which paves the way for the best British companies to export much more easily to the Chinese market. The UK is a world leader in financial innovation and I am determined that we become a centre for renminbi business so that many more of our brilliant exporters can benefit.

“At the Summer Budget I set out the next steps to boost business and reward working people in Wales. I was delighted to talk about how our plans, as a one nation government, will help not just large successful businesses like Airbus but businesses of all sizes right across Wales to grow and create jobs.”

Secretary of State for Wales, Stephen Crabb said: “The UK government is making it easier for big employers like Airbus to do business in China, and that is great news for the economy of North Wales. Employers know that this country is business-friendly and the kind of innovative arrangement put forward by UK Export Finance is proof of that.

“It is particularly impressive to see the indoor facilities that have just been completed for the Beluga Aircraft at Broughton. These huge craft can now be loaded in all weathers, and I hope that leads to ever busier order books for Airbus.”

David Godfrey, chief executive, UK Export Finance said: “This pioneering deal clearly demonstrates that as the UK’s export credit agency we have the flexibility to respond to the demands of modern finance deals and back exporters in Wales and across the UK through the economic cycle.

“RMB is already the second most used currency in trade finance after the US dollar and we fully expect to support many more such deals in the future.”

The offshore version of the renminbi has overtaken the Euro as the second biggest trade finance currency after the dollar.

In another UK government innovation, this week saw delivery of the fourth and final Airbus A380 aircraft to be funded under the world’s first corporate sukuk (Islamic bond) to be guaranteed by a western government. The aircraft was delivered to Emirates this week at Hamburg Airport with the bond guaranteed by UKEF.

The $913 million bond assurance marks a triple first, as well as being the first example of a sukuk bond sold in the debt capital markets to be backed by an export credit agency, it is also the first time a sukuk has been used to pre-fund the sale of aircraft, and the largest capital markets offering of any kind for aviation to carry an ECA guarantee. It follows the Prime Minister David Cameron’s ambition for London to stand alongside Dubai and Kuala Lumpur as one of the great capitals of Islamic Finance anywhere in the world.