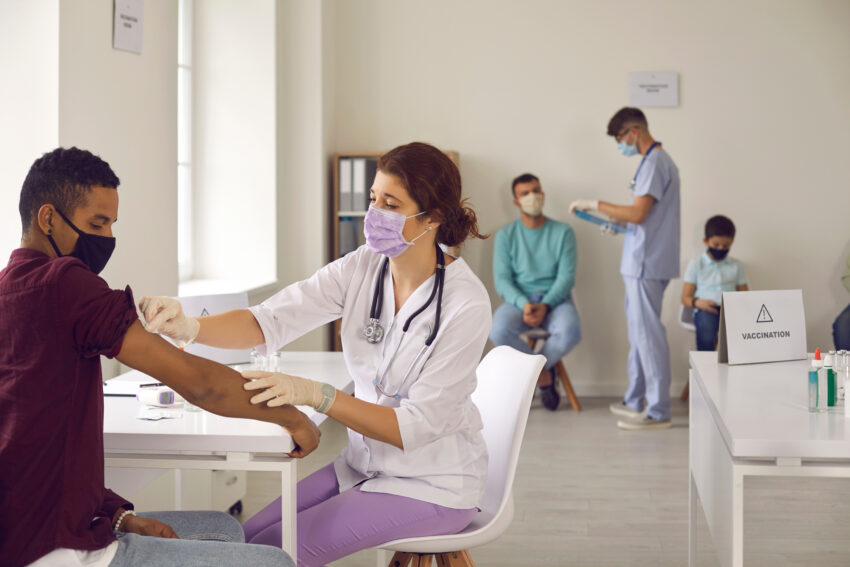 Britain is seeing a sustained fall in reported coronavirus cases outside of lockdown for the first time since the pandemic began.

In new evidence that the country has passed the peak of its third wave, the number of confirmed infections fell for the fifth consecutive day.

Yesterday, 29,173 positive cases were recorded, the first time it had fallen below 30,000 for two weeks and down from a peak of about 50,000 shortly before almost all legal restrictions were lifted in England last Monday.

It was also nearly 40 per cent lower than the same figure last Sunday and the first period in which case numbers had consistently fallen since the start of May.

Strict lockdown measures have been used to bring down cases during Britain’s previous peaks. This time the government has largely relied on vaccinations to control the wave and released restrictions even as cases were rising.

Other countries are watching Britain as a test of whether mass vaccination alone can bring a return to normal life. The approach, which even government advisers acknowledge is a gamble, has led to significant international criticism. Mike Ryan, executive director of the World Health Organisation’s health emergencies programme, called it “epidemiological stupidity”.

Despite the positive figures on cases, health officials and ministers are concerned that uptake of the vaccine is slowing among younger age groups, with a third of 18 to 29-year-olds not receiving a first dose.

It is understood that Boris Johnson suggested last week that university students should be fully vaccinated in order to attend lectures or stay in halls of residence.

In Zoom calls with colleagues from Chequers, where he has been isolating after Sajid Javid, the health secretary, tested positive for coronavirus, the prime minister is said to have been “raging” about the relatively low uptake of vaccination among young people.

The Department for Education has worries about the legality and practicality of the restrictions on students. They are also likely to be opposed by many Tory MPs who are already prepared to vote down the government’s plans for vaccine passports.

Paul Hunter, professor in medicine at the University of East Anglia, said he had been expecting to see a fall in coronavirus cases about now, but not one this big. “I would like to wait until next weekend to see what impact if any [England’s reopening] has on the epidemic before getting really excited,” he said. “But it’s looking good.”

He said that a fall in cases in Scotland had been an early indication that England would follow.

The seven-day average of hospital admissions and deaths continues to rise, reflecting the consequences of infections that happened over the past month. Yesterday 28 new deaths were reported, and on July 20, the latest day for figures, 917 people were admitted to hospital with coronavirus in Britain.

Hunter said the next few days would be crucial. “On the one hand a number of venues are opening, which will push up transmission,” he said. “But we have schools closing, and we know schools have been a main driver of the epidemic. I’m hopeful we will not see the big surge in infections that everybody and his dog has been predicting.”