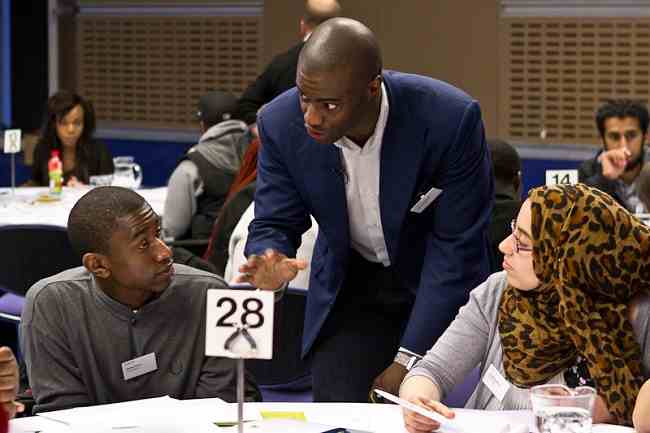 A special ‘Dragon’s Den’ style competition held yesterday, saw a group of young entrepreneurs pitch their business ideas in front of a panel of business leaders and major organisations.

There to launch the event and motivate the participants, was the first ever BBC Apprentice winner, Tim Campbell, MBE.

The event, which took place at the Museum of Brands in Notting Hill, West London was the grand finale of an eight-week business start up boot camp called MELP (Makers Enterprise Launch Pad). This is an annual project, funded by John Lyon’s Charity and delivered by EPIC CIC, to support young business minded individuals to learn more about the world of business through a series of workshops and seminars. This year the new delivery partners were Bright Ideas Trust, a charity founded by Tim Campbell, MBE.

Young people from RBKC, Hammersmith and Westminster competed against each other in a gruelling pitch-off in front of Judges who included Tanvir Ahmed from Santander (Kensington High Street), Christian Tilleray from Westway Trust, Mark Atkinson from the Royal Borough of Kensington and Chelsea, Nicola Burns-Thomson from Kensington Chamber of Commerce, Erik Mesel from John Lyon’s Charity and one of the 2015 MELP winner’s, Lili Chantel Laurent. The Head Judge was Epic CIC’s very own Fundraising Manager, Maxine Willetts.

On presenting the winning awards, the Head Judge, Maxine Willetts, said: “I have been very impressed by the imagination, passion and commitment which these young people have shown not only in creating new commercial products which I have no doubt will do well, but also the support and advice they have given to each other throughout a highly competitive and demanding process.”

Miranda Holms and Syban will now both receive a number of prizes worth in excess of £5,000 including 1-2-1 business advice, £2,000 seed funding, mentoring, trading space, and much more. All of these will help turn their business ideas into reality.

Olayinka Jacobs-Bonnick, Epic CIC’s Enterprise Learning Advisor, and one of the main coordinators behind MELP, said: “This year we’ve seen a fantastic array of talent. With the economy as it is at the moment, it’s brilliant to see such great young talent, as after all its these young entrepreneurs who will help drive London, and indeed the UK, forward over the coming years. I would like to take this opportunity to not only praise those who took part, but also those who helped make it happen. We’ve had some amazing support this year, and without our partners this wouldn’t have been possible.”

Brendan O’Keefe, Managing Director of EPIC CIC, concluded: “It was a fantastic event to conclude such a fantastic programme. Here at EPIC we are all about nurturing and helping young adults grow and develop. MELP is all about that and one of the key fixtures in our calendar of events. I’m already looking forward to next year.”