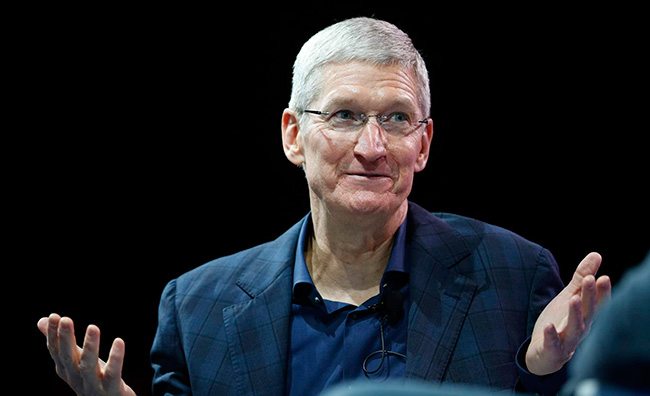 One shareholder told Cook, “I’d like to see you guys buy Tesla,” according to the Financial Times’ Tim Bradshaw.

Tim Cook’s Apple CEO’s response was unequivocally equivocal: “We don’t really have a relationship with Tesla … I’d love Tesla to pick up CarPlay,” Cook reportedly said, a reference to the in-car version of Apple’s iOS mobile operating system. “Was that a good way to avoid the question?”

However Cook may not be able to avoid the question for long as there are reports that Apple is secretly working on designing its own electric car. However with huge cash reserves and the companies apparent drive to expand it’s business to encompass its design expertise and manufacturing excellence to add four wheels to their mix.

However with Tesla, run by Elon Musk, creating innovative vehicles from its robot-powered assembly line for years and with a fully staffed company and Apple’s alleged car still on the drawing board some investors seem to think Apple should just get on with it and speed up the process by buying the whole company.

This would be a very easy deal to do too as Apple has $178 billion in cash at the last count and Tesla’s current market cap $23.9 billion so this would appear to be a no-brainer really and Apple did nothing to put a brake on any rumours.

“Am I insane to imagine something might happen here?” another shareholder—and Tesla Model S owner—reportedly said to Cook.

“Let me think if there’s another way to do a non-answer,” Cook replied, before not answering.