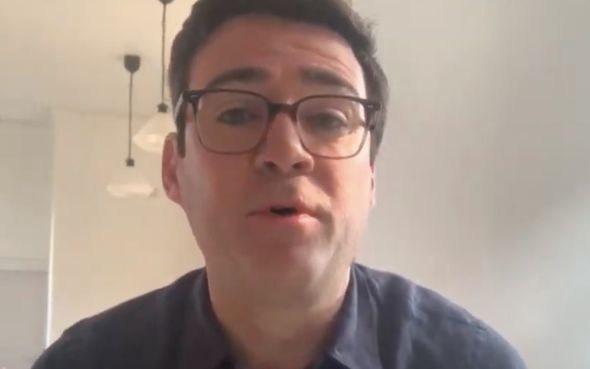 Manchester Mayor Andy Burnham claimed he is planning to reopen pubs and restaurants against Boris Johnson’s Government’s latest coronavirus advice in an attempt to speed up the economic recovery of the country.

Burnham said there should be a “standards-led” easing of coronavirus lockdown measures, with the Health and Safety Executive deciding whether businesses can put effective social distancing measures in place to reopen. Mr Burnham told Sky’s Sophy Ridge On Sunday: “I worry that if we’re going down the sectoral approach it could have heavy consequences for a city like Manchester, or say Blackpool – a town that really depends on tourism and hospitality.

“So the impact of a sectoral approach could hit certain places hard, so what I’m saying to the Prime Minister is think about a standards-led approach and actually create a national recovery council because we all need to have a voice in this debate.

“And these decisions that you are about to take are crucial to the economy of the North West of England and we need to be in the room debating it with you.”

He added: “Well I would have this overseen by the Health and Safety Executive so if people are making complaints that (social distancing) procedures aren’t being followed that there could be an investigation and people could be required to close again.”

Mr Burnham added: “We need to start thinking about building a better economy, building back better.

“So one of the other ideas I would put forward today is that ongoing Government support for businesses should be linked to good employment standards and particularly payment of the real living wage.”

The Labour politician said: “We do need to get people ready for living in a very different way, for instance, I’m planning to have social distancing on public transport, so things aren’t going to be the same – we need to be honest with the public about all of that.”

Mr Burnham added: “I think we’re going to see, in time, an inquiry into this one to say that things could’ve… should’ve been done better.

“And I’ve been quite supportive of some of the ways the Health Secretary has handled things, but I think his predecessor, the former health secretary, has some questions to answer because I don’t believe the plans put in place were as robust as they needed to be – but those questions are for another day and it is not for now.”

The Manchester Mayor was followed by Foreign Secretary Dominic Raab who rejected fresh calls for an early easing of the coronavirus lockdown, saying the outbreak was still at a “delicate and dangerous” stage.

The Government is coming under intense pressure from senior Tories to relax the strict social-distancing measures, amid concern at the damage they are doing to the economy.

But Mr Raab, who has been standing in for Prime Minister Boris Johnson while he recovers from the disease, said the Government would proceed “cautiously” in order to avoid a second peak in the outbreak.

“We are at a delicate and dangerous stage,” he told Sky News’s Sophy Ridge on Sunday programme.

“We need to make sure that the next steps are sure-footed, which is why we are proceeding very cautiously and we are sticking to the scientific advice with the social-distancing measures at this time, whilst doing all the homework to make sure that we are prepared in due course for the next phase.”