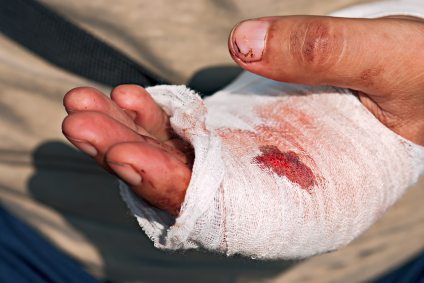 Analysis from the UK’s largest business insurance provider, based on the claims data of almost a quarter of a million businesses, pitted Leos at the very top of the table, with 7.7 per cent of owners with that name claiming on their business insurance last year – nearly five times the national average (1.6 per cent). Brendas followed closely behind with 6.3 per cent.

Other men’s names featuring in the top five included Giuseppe, Desmond and Perry, while for women June, Gaynor, Naomi and Cheryl also proved among the most accident-prone.

On balance, men emerged as the most careless business owners – comprising 80 per cent of the top ten names most likely to make a claim. The claims themselves ranged from amputations to earthquakes, but theft, injury and accidental damage ranked as the most widespread.

At the other end of the scale, Norman took the title as the most careful name in the country – just ahead of Henry as the least likely to make a claim out of all the UK entrepreneurs studied. Frances was named most careful female business owner, narrowly pipping Hilary to the post.

Amongst small business trades, the mobile phone retail industry made the largest number of claims with 11.8 per cent of phone shops claiming in the last year, compared to an average of 1.6 per cent. Sweet shops, ice cream parlours and laundrettes also made it into the top ten most ‘careless’ trades, while masseur is statistically the ‘safest’ profession, receiving the least claims per business owner out of all the trades covered.

Scotland ranked as the ‘riskiest’ region in the country, with entrepreneurs north of the border claiming more frequently than the rest of the UK. Delving into towns and cities across the country, the findings suggest that businesses in central London are most likely to make a claim followed by Bradford and Kirkaldy in Scotland, implicating these areas as some of riskiest places in the country to start a business.

In comparison, the South West was the most careful region of the UK, with business owners claiming less than any other region in the country.

Jason Stockwood, CEO of Simply Business, commented: “We conducted this research to investigate any correlations that might exist between people, places and professions in insurance claims behaviour. While we wouldn’t generalise this to all business owners, the results do seem to suggest that certain names can have less luck than others, even if it’s through no fault of their own. For example injury and accidental damage featured heavily amongst the claims for male names in our top ten, whereas damage to property dominated the female ranks.

“Amongst our top ten names for men and women we received claims for a fracture from a painter & decorator, laceration from a pub landlord and a plumbing malfunction from a coffee shop owner. The data was also interesting at trade level, revealing the extent to which certain retail business owners are particularly susceptible to theft.

“On the flipside, we discovered some interesting businesses with exceptionally low claims data, such as masseurs, florists and jewellers, suggesting these businesses are particularly adept at safeguarding themselves. Any of these trades run by people with our ‘safest’ names such as Norman and Frances might well offer the winning formula for the UK’s safest business ventures.”

Norman Wernham, aged 59, is a marine engineer who runs his own boat repair business. Based at Devizes in Wiltshire, Norman fixes and maintains the large number of recreational and residential narrowboats moored at the town’s Marina. Norman said: “I used to be a site foreman so I’ve seen some pretty careless behaviour in the workplace over the years, but I’ve always been conscientious and I’m good at spotting potential risks before they occur. In 10 years working at the Marina my only accidents have been a slightly strained back and a cut finger. I take care to ensure my workspace is hazard-free for myself and others in the vicinity and take pride in my equipment – both in its quality and by keeping it locked away to prevent theft. Working by the water can be treacherous but I conduct my business with great care. I have fallen in twice, but I know others that fall in almost every week!”