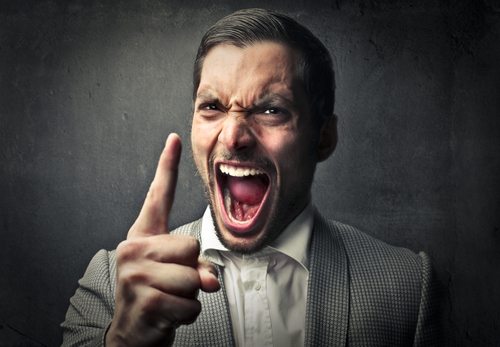 I used to coach a Managing Director who ruled by fear. He didn’t think so but it was the case. When he didn’t like something that was happening in his business he told people “in no uncertain terms” as he called it.  That was his euphemism for verbally abusing people. He would shout, and sometimes scream, abusive and hurtful comments at members of his team and then he would wonder why no one brought issues to him and why he had to go and find problems in his business that needed sorting out.

His problem was not just that he was abusive or that he thought it was acceptable, but that he thought once he had given a team member  “decisive critical feedback” (another of his euphemisms) that  everything was alright and things could proceed as normal. In other words now that he had got the angry energy out of him and given it to someone else everything was fine with the world. Anyone who has been on the receiving end of that type of behaviour will tell you that is not the case.

I recently worked with another business owner who hated conflict. She would do her utmost to avoid it. She would rather crawl over broken glass naked than tell someone directly that she had an issue. She wouldn’t tell them directly but she would tell others. After all she needed an outlet for her issues. In addition she thought that she did not show her animosity towards those she was in conflict with but, of course, she leaked the truth. They experienced her as flouncing in and out of their offices, delivering acid drops of sarcasm and treating them like social pariahs amongst other members of the team. It wasn’t personal – at some point or other she treated everyone that way.

What environment do you work in?

I’ve written before about the cultures that develop in changing conflicting environments especially if teams do not feel able to be honest with each other or live in fear. The first example was that of an aggressive environment in the making. It would either develop into a culture of fear and retribution or one where the loudest and most aggressive wins every time. The second story is the start of a classic passive aggressive culture where problems are never sorted out, back biting and bitchiness are rife and more energy is expended acting out conflict than actually doing any business.  I gave more detail in my article in October (Sulking, shouting or sharing – what’s your company’s culture?) where I advocated a Sharing culture based upon healthy assertive sharing of feelings.

Can you change your company’s culture and ‘Clear the Air’?

Culture change is never easy and to commit to it you need to be aware of the issues that the other cultures create especially the inefficiencies they build in to your business. The costs to the business of not moving towards a healthy assertive culture can be felt in lost productivity (too much time back biting) , lower creativity (too much fear) and increased employee turnover (too much stress). This is why we call this process ‘Improving Efficiency Through Honest Communication’.

In brief, the business owner takes a decision to educate the workforce around stress, the triggers for conflict and what each individual can take responsibility for when they play a part in conflict. The final part of the process is learning a safe, healthy. Non-shaming process for communication feelings, often anger, to each other. We call this process Clearing the Air.

One organisation committed to this so well that the first agenda item on any of their team meetings was Clearing the Air. They had recognised that if they did not clear the air before they got down to the important act of talking about their business that the petty differences and conflicts that had built up over the last few weeks would get brought into their meeting somewhere, somehow and the conflict would be acted out when it was inappropriate and in secret.

This was a brave boss who sat there the first day and respectfully listened to her direct reports tell her how they felt about her behaviour in the previous week. It was also amazing role modelling. They found that by Clearing the Air first they removed negative feelings, cleared up misunderstandings and had far more positive and productive meetings as a result. They also learnt that by respectfully listening to how someone feels does not mean you have to agree. Often it’s the being heard that really matters.

So what’s your culture going to look like in the New Year? How will it affect your business? Crucially, which culture would make you want to get up every morning and give your best?