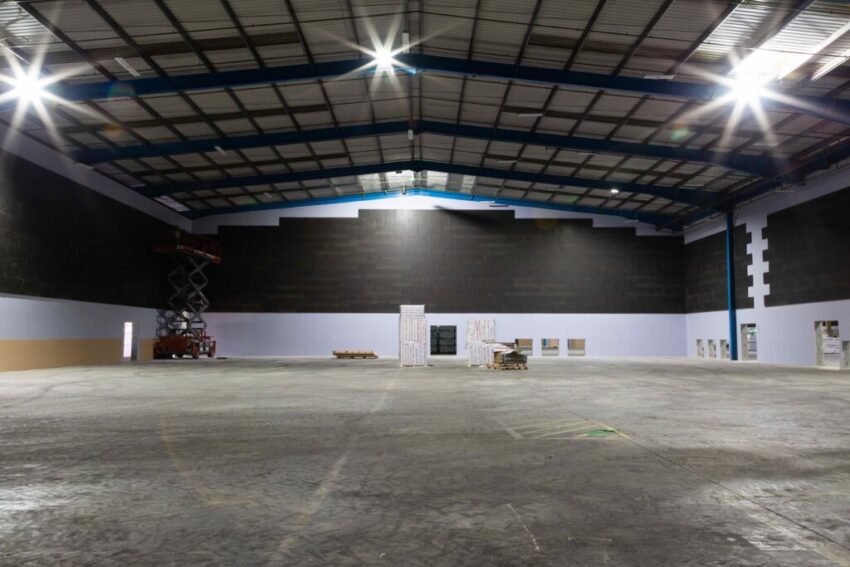 Leading provider of space to the film industry, Location Collective, to open doors to Enfield-based OMA Film Studios this summer after completing build under challenging circumstances during Covid-19 outbreak; increasing film production studio space within London by 53% at crucial time for both the film industry and the economy.

Over the past decade, the UK has benefitted hugely from a steady rise in global filming activity as increasingly more content has been made. Total spend on UK film and high-end TV production reached £3.62bn in 2019, a 16% increase on the previous year, primarily driven by investment from major studios and content providers including Disney, Netflix, Warner Bros and NBC Universal.

The film industry has already proved critical to the UK economy according to the Office for National Statistics (ONS), with the sector helping rescue the nation from a potential pre-Brexit recession, pushing us back into the black in the summer of last year.

The key challenge resulting from an increase in production within the UK has been the need for space, with studio facilities in particular being in very short supply. In 2018, a report by property consultancy Lambert Smith Hampton estimated that an additional 1,900,000 sq ft of studio space was needed to satisfy demand, and prevent big budget production being squeezed out of the country.

This need has not gone unnoticed. In March, it was announced that the British Film Commission is set to receive £4.8 million over the next three years to encourage studio space investment in the UK. This fund is part of the government’s latest budget; designed to help expand promotion of the UK as a destination of choice for film production.

Prior to the Covid-19 outbreak, film locations agency Location Collective saw an opportunity to answer this need; offering an alternative and more efficient way of creating the studio space the industry needs. The company secured a lease on an existing industrial depot site, well situated for film industry use in the London borough of Enfield, and set about converting it into the biggest film studios inside London.

This solution bypasses the pitfalls of building a studio facility from the ground up, drastically cutting the timeframe for creating a working studio facility at a time when the industry will need immediate space in order to begin recovery after Covid-19.

As this type of conversion has never been done before on this scale, the build has involved an 8-month design process to get the specification right and secure the necessary permissions. The project has been expedited with the help of Enfield Council, who have backed the initiative with enthusiasm as an exciting addition to Enfield’s cultural offering.

Keeping the build on track throughout the past few months has been a huge logistical challenge, which has involved socially distanced building, made possible by the 139,000 sq ft site. However the importance of getting the project completed, fuelled by the necessity of the site to aid production after the crisis, has pushed the build forward.

OMA Film Studios is due for completion and will be ready to welcome its first film industry customer this summer. With the industry estimated to be back to filming soon following the recent Government approval of the British Film Commission’s post-Covid filming safety guidelines, and with controllable space likely to be more in demand than ever after Covid-19, this will prove to be a crucial time for providing increased studio capacity.

Adrian Wootton OBE, CEO of the British Film Commission, commented: “This addition to the UK’s filming infrastructure is hugely welcome. The British Film Commission is focused on the key role our sector can play in supporting the UK’s recovery. With the release last week of our Government and industry backed guidance to support the safe restart of film and high-end TV production, and with pre-existing sector strengths like generous tax credits and a world-class workforce, we anticipate more demand than ever for UK stage space in the coming months.”

Antony Iredale, Managing Director of Location Collective, said: “It’s not been easy keeping this project on track in the current climate but our instinct was that on the other side, contained, controllable spaces were going to be the ones the film industry needed most. The British Film Commission’s Codes of Practice for safe filming post-Covid demonstrate that this is very much proving to be the case.

Continuing to invest in projects like this is critical, not just to ensure the film industry can bounce back quickly, but to help restore the health of the UK economy as a whole.

We are extremely excited about working closely with Enfield council to make a huge success of OMA Film Studios and to place Enfield firmly on the map as a hub for big budget filming activity.”

Ian Barnes, Enfield Council’s Deputy Leader, said: “Enfield is fast becoming the London borough for high-end television and film production. OMA Film Studios opening in Enfield is hugely exciting and beneficial for the borough, and will attract a continuous flow of high calibre film and television productions for many years to come.