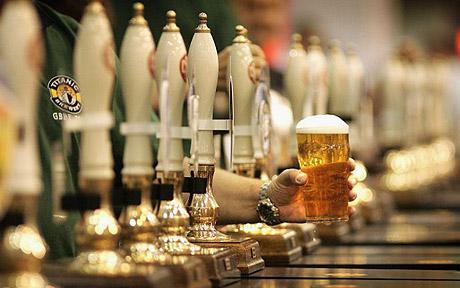 As many as 4,000 British pubs will deservedly go out of business over the next year because they are “stuck in the 1980s” and complacently offering “indifferent” food, drink and service, a national industry guide has predicted.

The editors of the Good Pub Guide 2014, published today, forecast that between 2,500 and 4,000 of the 49,500 public houses in the UK will be forced to shut and even says it is “high time that they closed their doors” to make way for more energetic and dynamic new licensees.

The Campaign for Real Ale (Camra) has reported that 26 pubs are closing a week (a total of 1,300 a year) but the Good Pub Guide editors, Alisdair Aird and Fiona Stapley, expect the figure to escalate over the next 12 months due to the increase in disposals by pub companies and predictions from insolvency experts.

Camra described the findings from a guide that claims to support the industry as bizarre.

Although the scale of closures will mean bad news for staff and regulars, the joint editors said in the introduction to this year’s guide that the pubs forced to close will be “bad pubs at the bottom of the pecking order”, which are “happy with indifferent food, drink, service and surroundings”.

Stapley said: “The worst quality a pub can have is a landlord that doesn’t care much about the customers. Licensees like that give the pub trade a bad name. Pubs closing keeps the trade healthy and robust. They have got to diversify if they want to succeed – they just can’t open for lunch and open again in the evenings any more.”

However, the guide also predicts that more than 1,000 new pubs will open next year, often in former premises that have been shuttered for years. The once thriving pub industry has been brought to its knees due to cheap beer and lager on sale in supermarkets, leading to mass closures.

As a measure to relieve some pressure, it was announced in the March budget that the price of a pint would be cut by a penny, in a surprise reversal of the chancellor’s commitments to annually increase beer duty by two percentage points above inflation until 2015.

The Pub of The Year was named as the Olive Branch in Clipsham, Rutland, which was hailed as “a first class all-rounder” with “sublime food”. Other awards including best landlord (Tim Gray, of the Yew Tree, in Lower Wield, Hampshire), brewery (Fuller, Smith & Turner), new pub (Bulls Head, Mottram St Andrew, Cheshire), dining pub (Stagg, Titley, Herefordshire) and whisky pub (Bon Accord, Glasgow).

More than 4,700 pubs are featured in the guide and those with full entries are required to pay a fee, which helps to cover research and production costs.

The guide singles out what it calls the “good pubs” – the 4,800 or so excellent establishments – although between the two extremes are the remaining 40,000 or so “average pubs” which range from “straightforward locals to the big chains of standard-pattern eateries and drinkeries with their reliably consistent offerings: you always get what you expect, no less – but no more”.

The editors also call for pubs to name their chefs on menus and websites and help close the “absurd status gap” between the growing horde of TV superstar chefs and talented pub chefs.

But the editors’ apparent support of large-scale closure attracted fury from Camra, which publishes its own guide in September, in which it will highlight some 100 pubs that have been saved by their communities using the new Localism Act.

A spokesman said: “How bizarre that a book called the Good Pub Guide should welcome the closure of as many as 4,000 pubs. Pubs need to be saved – not thrown on the scrapheap. I would say there is a degree of cruelty in the editors’ call for pubs to be closed as people will lose their jobs and, in the case of publicans who live on the premises, their home as well.

“Unlike the Good Pub Guide, Camra’s Good Beer Guide does not charge for entries and pubs are selected on their merit alone. These pubs “at the bottom of the pecking order” may suit the needs of their regulars and be the focus and hub of their communities and should not be left to the vagaries of the market.”