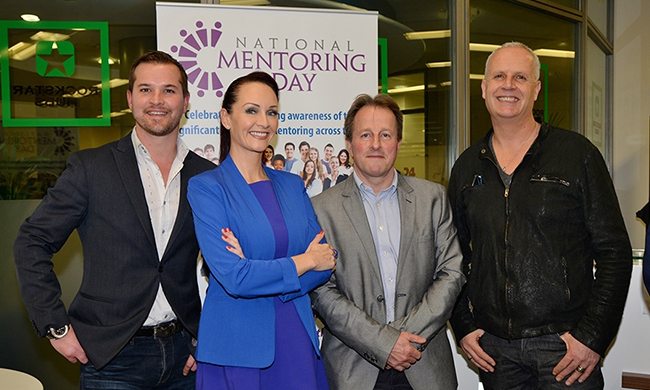 Following the buzz that a new National Mentoring Day was to grace the UK events calendar, the influx of support has ensured this new awareness day is here to stay.

Alongside a nationwide ‘get involved programme’, a celebratory inaugural summit event took place during the afternoon of at the RockStar hubs in London on the 27th October.

The aim of the National Mentoring Day to generate awareness of the benefits of mentorship, succeeded in doing exactly that. Welcoming over 150 business celebrities, mentors and mentees, the National Mentoring Day summit was everything it was set out to be. A giant step forward in ensuring that mentoring becomes much more of a business culture than ever before, the day is already in the diary for next year.

In show of their support, the summit event was heavily attended by prominent business figures such as Mark Wright, The Apprentice 2014 winner, Alison Khan from the ‘Mentoring Women in Business’ Programme run by the Cherie Blair Foundation for Women and guest speaker Kevin Poulter from law firm Bircham Dyson Bell LLP (BDB).

The debate targeted how mentoring should be shaped for the future and examined how businesses, universities and even public services can cultivate mentoring as a standard practice. During the debate Jonathan Pfahl commented, “The future of mentoring is to globalise it through technology – make it international and easily accessible. According to government research, 7 out of 10 established SME’s still don’t believe in Mentoring! We need to find more ways we can work more closely as a group of mentors nationally to change that mind set for the UK SME space to be in a better place.”

A guest speaker at the event, Mark Wright, The Apprentice Winner and Director of Climb Online gave a powerful talk about his own mentoring journey with Lord Sugar explaining, “Mentoring is unbelievable. Bill Gates, Warren Buffet and Richard Branson have mentors so why wouldn’t a small business owner or someone at the start of their journey not have one. It’s really important that we get the mentoring message through.

“National Mentoring Day provides a real opportunity to highlight the true value and importance of Business Mentors. Without them, some of the world’s largest business empires may not exist and I for one would not be standing where I am today”.

Also among the celebrity guest speaker line up Will King Founder of King of Shaves, gave a truly motiving call to action commenting, “if a young kid from Lowerstoft without any internet can do it so can you.

“It has never been easier to found a business. You can now get your business funded via Kickstarter, crowdfunding platforms or angel investors. You can set up within 24 hours and have something up for sale via one of the various ecommerce platforms but if it’s so easy, then it’s easy for everyone else as well. The vital takeaway from this summit is that mentoring is key. Some companies never get to be as good as they could be. It’s tough out there but a client I worked with earlier in the year has put about 30 million pounds onto its balance sheet by taking a recommendation of a decision I advised him to do. That was satisfying.”

With half a million new companies founded over the past 18 months, the UK is clearly not short of aspiring entrepreneurs. With the National Mentoring Day campaigners inundated with emails flooding in from all over the country, it is clear that the public’s reaction to the possibility of increased mentorship opportunities has been an overwhelming ‘yes’. Current mentors are also pointing out that entrepreneurship could even be a career should more mentors step up to the plate.

A recurring thread throughout the summit speeches highlighted that finance is not the sole crux of accomplishment; it is accumulating a wealth of knowledge and business smarts that will really set an individual up for success. It is here, where mentoring promises to be the future of entrepreneurship and as seen, the benefits are huge, especially in an economy that has caused many students to shy away from career development due to lack of funds and guidance.

Founder of National Mentoring Day and the summit event, Ms Chelsey Baker concludes, “National Mentoring Day and the summit event are just a salute to the positives mentoring imparts to society. Implementing the new mentoring day in the national calendar is just the start of a new campaign in reinforcing the importance of mentoring, encouraging the development of more mentoring schemes, particularly for young people, and creating a new awareness among the British public of the benefits mentoring brings.”