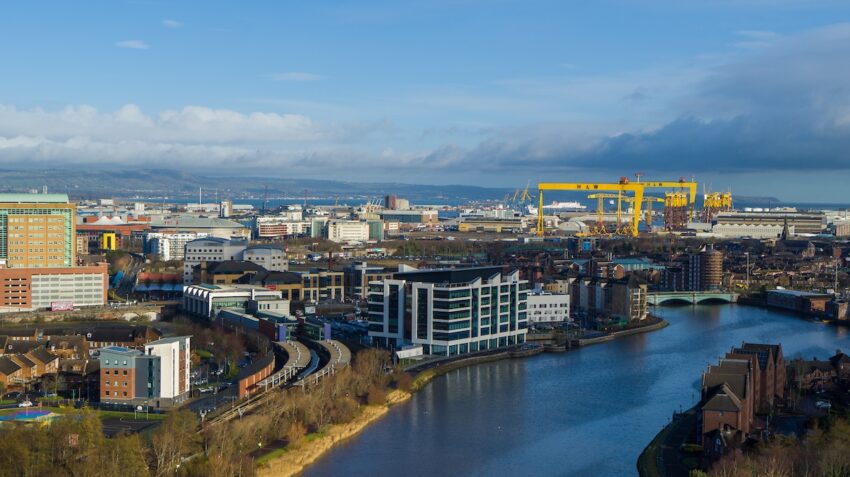 As life opens up, the future looks brighter still. We’ve all got a list of things we’ll never take for granted again.

Yes, this past year and a half has presented its challenges, but it’s also brought opportunities and demonstrated the resilience of many of Northern Ireland’s key industries, academic institutions and, of course, the people behind them.

In recent years, Northern Ireland has topped countless polls measuring the happiness of its citizens. Even as recently as 2020, we came out tops as the happiest region in the UK. Even in the face of the pandemic, the annual Happiness Index by Lloyds Banking Group found contentment amongst Northern Ireland’s people had increased almost six per cent, while the UK as a whole reported a negligible rise of just 0.4%.

As the regional business development agency for Northern Ireland, we see the evidence of this every day. We might be the smallest region of the UK with only 1.8 million people, but we’re big on success. Companies both large and small come to Northern Ireland seeking growth – and Invest NI supports them with open arms. Plus, our initial welcome often turns into life-long partnership.

Here are some of the reasons why.

Northern Ireland is revered for the quality education offered by its schools, colleges and universities. Nearly a fifth of public expenditure is on education, and we consistently outperform all other UK regions in academic qualifications at GCSE and A-Level.

We’re hungry for knowledge and personal development, especially when it comes to the industries that are shaping the future. Northern Ireland currently has the highest percentage of qualified IT professionals in the UK and Ireland, for instance, with one in 11 people working in the knowledge economy. Each year, there are 4,000 graduates with business qualifications, with tech being a specific area of focus, alongside finance and other professional services.

US workforce management company, Workrise, is just one example of a new investor to have come to Northern Ireland to access its skilled workforce. It is now in the process of setting up a technology engineering centre which will create 153 new jobs.

“We selected Northern Ireland as the location for this new centre based on the high-quality software engineers with industry skills, along with a strong pipeline of graduates from your excellent universities. This along with the practical and financial support from Invest NI, made Northern Ireland a very attractive location.”

The demographic of Northern Ireland is also favourable when it comes to talent. We have one of the youngest populations in Europe – over 50 per cent are aged under 40 – as well as one of the most loyal workforces, with acknowledged low labour turnover rates.

Finally, if our existing talent isn’t enough, there’s another route. When a company is interested in creating jobs in Northern Ireland, Assured Skills provides the necessary support to source a high quality workforce through bespoke training and recruitment.

Fully funded by the Department for the Economy, the programme typically works by facilitating the development, recruitment and delivery of a six to eight week pre-employment Assured Skills Academy with a college or university partner. Candidates are of a high calibre, and minimum entry level qualifications, such as a bachelor’s degree, can be set.

The Academy Model is flexible and versatile, and has been used to help companies recruit new staff in a variety of areas – from data analytics, software development and cyber security to business, financial and legal services and even welding.

An environment that helps you get ahead

In spite of our small stature, more than 1,200 international companies currently operate in Northern Ireland, including major US companies like Microsoft, Allstate, Aflac and Seagate. And when they come, they tend to stay, with over 70 per cent of new investors choosing to re-invest in the region further down the line. That’s precisely why we still hold the accolade for attracting more FDI jobs per head than any other region in the UK.

But beyond talent, what’s the pull?

Firstly, the competitive cost of doing business and the renowned quality of life in Northern Ireland are clear benefits for employees and employers alike. Property costs, for instance, are around 75 per cent lower than they are in London and 60 per cent lower than Dublin, and, in line with lower living costs, salaries can be around 30% and 20% lower compared with London and Dublin respectively.

Secondly, digital connectivity is of significant importance to investors, even more as our world moves increasingly online and more people move to flexible or hybrid working. Northern Ireland benefits from quality connectivity throughout, and, thanks to its fibre foundations, Belfast is to be one of first cities in the UK to benefit from a city-wide roll out of 5G.

Northern Ireland also offers powerful networks of the non-digital kind. Collaboration is rich and well embedded across all sectors, and this ability for public, private and academic communities to work together has been instrumental in our success. In the coming years, this approach is set to unlock an anticipated £1 billion in fresh investment through a host of City Deals.

Finally, Northern Ireland provides uniquely international links, allowing companies to serve both UK and EU markets from one location. As a hotbed for investment, particularly in R&D, Northern Ireland can serve as an ideal central location for trialling, manufacturing, and commercialising products to reach multiple markets. For those seeking information on market access, a fact sheet is available on our website.

There are also opportunities for those wanting to help create nature reserves in Ireland.

With its long industrial and shipbuilding heritage, Northern Ireland was previously associated with more traditional sectors. However, in recent decades, there is established leadership in some of the world’s most important and cutting edge industries including digital transformation, cyber security, biotech and data analytics.

Likewise, professional and business services, including legal and finance, are now very mature in terms of both access to talent and reputation. Indeed, Northern Ireland is home to some of the biggest names globally, including EY, Deloitte, PwC, KPMG, TPIcap, Citi, Allstate, and Aflac.

These hubs of expertise are a major pull for both talent and investment, feeding innovation, discovery and growth. There are many great examples. One of the UK’s most significant clusters of cyber security businesses has formed around CSIT, the UK’s Innovation and Knowledge Centre for Cybersecurity at Queen’s University, for instance, with representation from Allstate, Citi and IBM. For this very reason, Belfast has become the number one international location for US cyber security development projects in recent years.

Industry giants are also part of the mix, including Big Four accounting firm, PwC, which recently announced £40million investment to create an Advanced Research and Engineering centre at its fastest-growing division, Operate, which is based in Belfast.

“It’s a huge statement of confidence from PwC UK’s Executive Board in both the Operate business and our local talent. The strength of our people has already enabled us to turn Operate into PwC’s fastest-growing division and I’m very proud that this gives us the opportunity to create hundreds more highly skilled jobs in Northern Ireland.”

As you can see, Northern Ireland has a lot to offer as a place to live, work and do business. These hubs of expertise are a major pull for both talent and investment, fuelling a diverse, future-looking economy.

We’re excited about opportunities our changing world will bring and we’re eager to support like-minded businesses with their sights set on growth.

We look forward to welcoming you to NI.

Invest Northern Ireland is the region’s business development organisation. Its role is to grow the local economy by helping new and existing businesses to compete internationally, and by attracting new investment to Northern Ireland.

Find out more about how we can work together with you and your business.