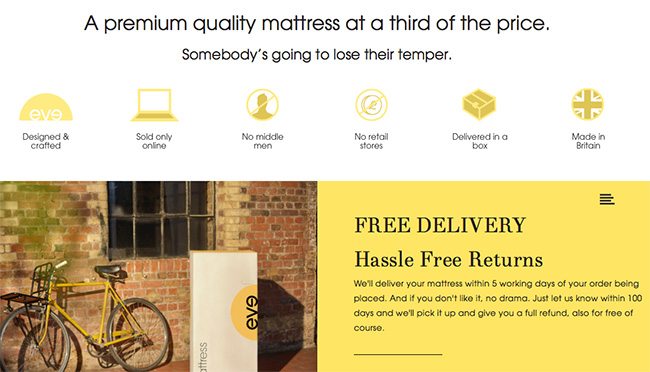 The new e-commerce venture launched to disrupt the sleepy mattress industry has announced the closing of its £600,000 seed round.

The original round, which was announced in February, was reopened due to unprecedented interest from new parties. This comes as eve launches services in Germany, just three months after launching in the UK.

Today’s announcement follows significant growth figures from the business, which is disrupting the mattress industry by delivering premium quality mattresses direct to consumers at a fraction of high street prices.

Since launching in February 2015, eve’s revenue figures have exceeded investor targets by over 1500 per cent.

At the current rate of growth the company expects to secure £1 million in sales by the end of June, just five months after launch.

Eve was set up by four experts in their fields comprising: Jas Bagniewski, the ex-head of Zalando UK, co-founder of Groupon UK and other successful e-commerce businesses; Joe Moore, a logistics expert previously at Deloitte; James Fryer, a mattress expert with years of product development experience; and Kuba Wieczorek a branding and creative professional who came via Soho’s advertising hub and Channel 4s Creative arm.

Jas Bagniewski, CEO of eve, said: “Since launching just three months ago, we have been blown away by the popularity of our product. We set out to create the world’s most comfortable mattress, designed, engineered and made in the UK, at a price that’s fair – and consumers have really responded to this. Today’s funding announcement is more great news for the company. To have the backing of investors from around the world is fantastic and we’re looking forward to using this funding to continue building on the product and the team. We are also very proud to be exporting a UK product overseas so soon after we have launched.”

Rebecca Hunt, a member of the Ventures team at Octopus: “At Octopus we’re always looking for new business ideas and great entrepreneurs. With eve we have both boxes ticked. We’re really pleased to be joining eve’s seed round and look forward to working with Jas and his talented team over the coming months, as they build on the business growth already achieved this year.”