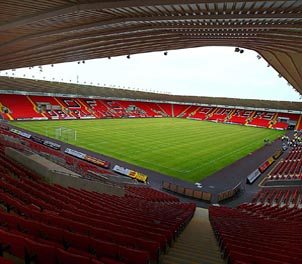 Darlington FC was placed into administration on 3 January 2012 and without a viable buyer the fans (through a new company – Darlington FC 1883 Ltd) enlisted the support of Exeter-based Crowdcube to help raise the finance needed to avoid the unthinkable. If successful, the bid will mean that fans will own 100 per cent of the club and set a remarkable precedent that other struggling sports clubs could follow.

Fans of the Quakers from across the UK have supported the bid so far and local schools across the town are running non-uniform days to raise funds. The support extends beyond the north-east with an Italian man who has followed Darlington FC since he was first randomly assigned the club 20 years ago playing the Championship Manager football computer game. He has never visited the town and has invested £100 to help save the business.

Jenny Chapman, MP for Darlington and a Quakers fan comments: “If Darlington FC went bust it would be a disaster for the local community and economy. With clubs around the country experiencing financial difficulties we passionately believe that fan ownership is the future for Darlington and other clubs to ensure that they are run sustainably and are here for future generations to enjoy.”

Shareholder benefits
This month football finances have come under increasing scrutiny with two high profile clubs – Rangers FC and Portsmouth FC – being placed into administration. Darlington’s bid for survival aims to give fans a genuine voice in the future running of the club with opportunities to vote in annual elections, to appoint directors to run the football club and to sit on the board. They will also receive invitations to investor-only events, a regular exclusive newsletter, as well as a named mention on the football club website and on an investor ‘thank you’ plaque that will be erected at the stadium.

Luke Lang, co-founder of Crowdcube says: “Crowdcube was designed to be a platform to help entrepreneurs raise growth capital but Darlington is proving that it is just as effective for sports clubs seeking to raise money. As a personal supporter of Exeter City FC, who faced its own financial difficulties in 2003 and is now owned by fans, I’m especially happy that Crowdcube could provide that platform to make this fantastic dream one step closer to becoming a reality. Crowdfunding has tremendous potential for the public to step in and take ownership to safeguard important organisations such as a village pub, post office or in this case a football club.”