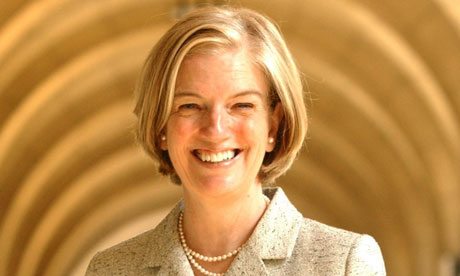 Her reign at the media group has been characterised by a shift away from the old and a dogged pursuit of the new. By buying and selling companies she has reshaped Pearson from a rag-bag conglomerate that included, among other things, Madame Tussauds, part of Channel 5 and half of investment bank Lazard, to one that its sharply focussed on content and education. She has scaled back its reliance on print business models and the well-worn US and UK economies in favour of fast-growing territories, digital products and educational services.

In doing so, Dame Marjorie has tripled annual sales to £5.9bn and last year drove operating profits to a record high of £942m as the company forged into new markets.

Pearson’s share price is nearly 90 per cent higher than when she started – no mean feat for any company but particularly a media business. Many others have travelled in the opposite direction over the same period.

But fittingly for the former rodeo rider, Dame Marjorie’s ride has not been altogether smooth. At around the same time as she was selling Pearson’s collection of fine wines, she pledged to double the company’s share price within five years.

The softly-spoken former journalist started out well, tripling the company’s value on the back of the dotcom boom. But then that dotcom bubble burst and shareholders woke up to the fact that Pearson’s digital ventures, particularly FT.com, were chewing up cash. Alongside successful investments were notable flops. Even Dame Marjorie cringes when she recalled the pink FT mobile phone of the late nineties.

By 2002, Pearson’s share price had fallen back below its value at her starting point. It took several years for Dame Marjorie to get back on track and regain the City’s confidence with steadily rising profits.

But it is not just shareholders for whom Dame Marjorie has delivered results. The American born mother of three has charted new territory for women. By becoming the first female chief executive of a FTSE 100 company, she raised the bar for female ambition and made the rest of the largely white and male corporate community take a harder look at their own boards.

Yesterday she cited Pearson’s “culture” as her finest achievement at the company. That may be so, but Dame Marjorie should also be credited with recalibrating expectations in the wider business world.