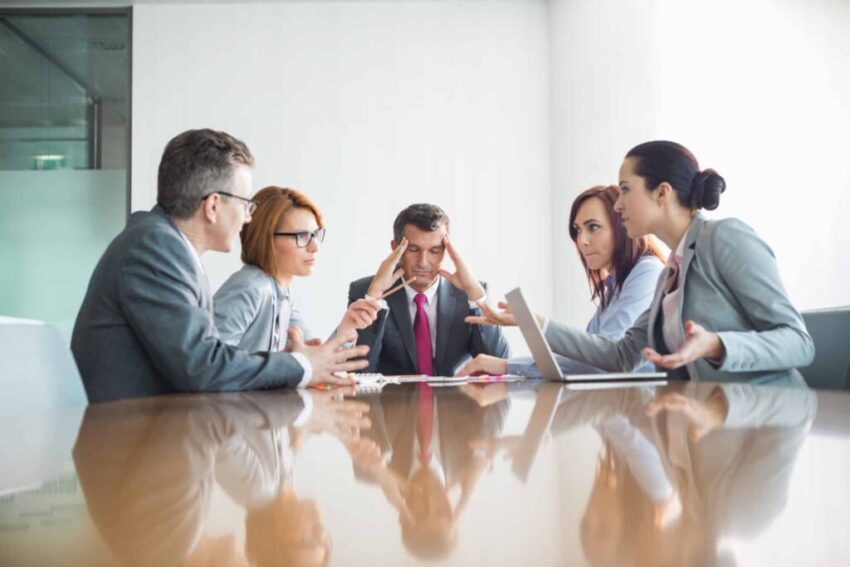 As soon as a group of people is put together to achieve a common goal, conflict becomes a likely outcome. It is challenging for some people to learn to pull in one direction and work toward a common goal.

This leads to disagreements, disputes, and conflict. While these are natural occurrences in any setting, they are more prevalent in the workplace.

An insightful manager understands that these conflicts may occur and has an arsenal of strategies to resolve them and allow everyone an opportunity for personal growth afterward. Such managers allow conflict situations to strengthen individuals and teams instead of dividing them.

Here are some common causes of intergroup conflict in the workplace:

The intergroup conflict definition differs from that of interpersonal conflict. The former refers to groups of employees who come into conflict with other groups. The latter refers to individuals who have a dispute or conflict situation. Sometimes groups of people involved in an intergroup conflict are drawn along workplace lines. For example, there might be a conflict between the sales and marketing teams or between management and factory floor employees.

On other occasions, these groups can form along the lines of personal similarities, such as gender, religion, ethnicity, and sexual orientation. Therefore, tensions could arise between men and women if one group perceives itself as receiving less preferential treatment than the other.

Good managers make decisions that bring the conflict under control while respecting each group’s points of view. They bring these groups together to air their grievances and come to an amicable resolution. These managers also use diversity to unite and strengthen their team instead of weakening the group.

There is nothing more frustrating for one group of people when their performance standards are crystal clear while other employees do not seem to have any. When annual increases are announced, they might get the same increment. This will make the group managed within accountability parameters feel resentful toward the group where it seems that anything goes and there are no consequences. It creates a sense of inequity that demotivates hardworking employees and causes increased frustration.

Avoid this problem by ensuring that all groups have identical performance standards they are expected to adhere to. Senior management should ensure that all team managers apply the same key performance indicators to their employees. Additionally, managers should be monitored to ensure that they are not giving ‘favorite’ employees a pass on things they expect from other team members, as this breeds resentment and conflict. Such favoritism is most unprofessional and should have no place in an employment environment.

Whether in one’s personal or professional life, most conflicts tend to arise because of miscommunication or a complete lack of communication. When people are not receiving information, it leads to frustration and anger, which spills over into conflict. Additionally, when the information employees receive is misinterpreted, the same results follow.

The flow of information and how it is communicated is pivotal in an organization’s success story. Managers should ensure that they spend time sharing information in a productive, appropriate manner. Therefore, meetings should always be followed by a written communication summarizing everything discussed so that there is no room for ambiguity. Withholding information or failing to communicate it timeously are additional ways that communication problems can lead to intergroup conflict.

Intergroup conflict often occurs because one group relies on the other to perform a task before they can get to theirs. For example, salespeople rely on the production and warehousing teams to have products on hand to deliver when they make sales. When one group appears not to be pulling their weight, the others might become frustrated, which starts a conflict.

When a manager realizes a problem with task interdependence that causes intergroup conflict, they need to act decisively. A thorough analysis of the problem should follow to determine where any challenges lie and what can be done to remediate them.

Instead of fanning the flames of conflict, a manager should get the teams together to discuss what causes the issues and get suggestions for solutions. This approach makes each group feel valued and heard, making them likelier to cooperate with any interventions to eliminate the problem.

Use of common resources

We need only look to Mother Nature to see how using common resources can cause conflict. For example, in a pride of lions, skirmishes might break out to determine who eats prey first. Sometimes, species might clash because one is another’s territory, such as when hippos chase animals away from their stretch of water.

Similar principles apply in any workplace. If two groups have access to the same equipment and need it simultaneously, some conflict will invariably follow. Managers need to resolve such issues by ensuring that all groups have fair access to facilities and that more are acquired if necessary to allow everyone to do their job efficiently.