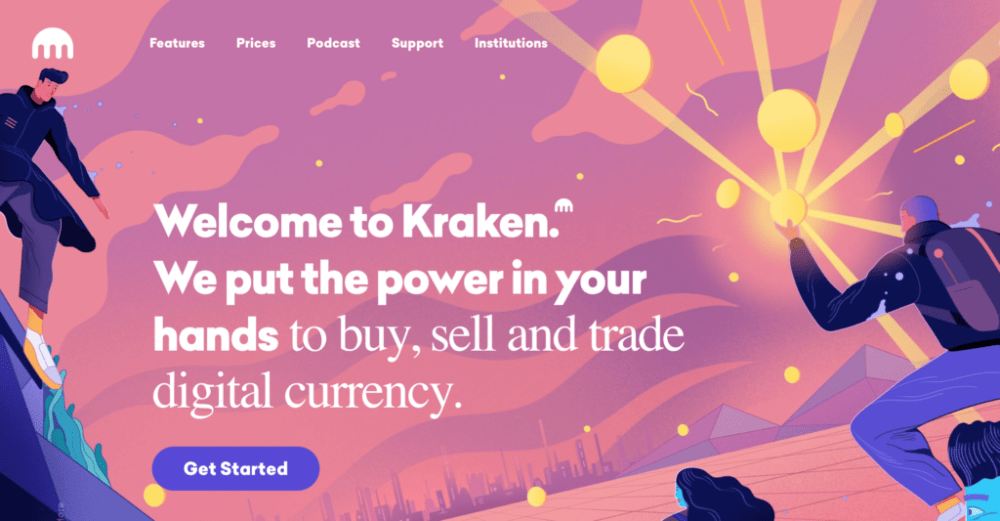 Kraken is one of the most respected and recognised crypto-exchange platforms in the business. But is it the exchange for you?

Kraken prides itself on its high level of security, its optimisation for everyone — from beginners to experts, around the clock support, and high liquidity.

Kraken supports a range of popular fiat and cryptocurrencies, enables fiat-to-crypto, crypto-to-crypto, and fiat-to-fiat trading, and trades upwards of $100 million USD daily. It offers margin trading, at varying maximum leverages depending on the pairs.

Since Kraken’s inception, it has become somewhat of an innovator and powerhouse. In 2013 it partnered with Fidor Bank to launch the “world’s first cryptocurrency bank,” and in 2014, when Bloomberg Terminal first started to list Bitcoin pricing, Kraken was elected to provide the data. In 2015 it became one of the first exchanges to offer margin trading on Bitcoin, and a dark pool for anonymous trading. The platform has made numerous acquisitions over the years, strengthening its presence in various corners of the world, most recently in Australia with the addition of Bit Trade. At the close of 2019 Kraken was valued at $4 billion USD.

Security is a core value of Kraken’s, undoubtedly contributing to its respected reputation. It has different levels of security, some mandatory and some optional. Two-factor authentication (2FA) is required to sign in, and encryption of sensitive data is standard, but there are options to set up a master key, and secure communication through email encryption. Finances use cold storage for 95% of deposits as protection, and their full reserves mean there is no withdrawal delay.  Monitored continuously, the platform has a team dedicated to securing weak spots by attempting to attack the platform.

Kraken also prides itself on its rigorous approach to self-regulation and was an early participant in crypto self-regulatory bodies in the U.S. and Japan. It has its own ethos, which balances consumer protection with a crypto ecosystem that can flourish, and on occasion it has rejected government regulatory guidelines, meaning it cannot operate in those districts.

Kraken has a tiered verification system, which determines what you can do on your account, making it adaptable — for example, a corporation trading in high volumes will benefit from a Pro account which enables large withdrawals. However, if you have smaller amounts to trade, then a tier Starter or Intermediate account might be better suited. To gain access to a Starter account you can signup without a government ID, meaning initial signup is quick and easy, but upgrading to a higher account will likely require a few extra days for ID verification.

For high volume and consistent traders, whether you are an individual or an organisation, Kraken offers account management, to optimise consumers trading experience, a smart way to retain high-investment consumers, and ensure liquidity.

Liquidity has become a selling point for different exchanges, and Kraken can put its money where its mouth is on its claim of maximum liquidity, particularly for bitcoin. At the time of writing, Kraken ranked fifth globally for crypto-exchange on this score.

Historically, one of the greatest criticisms of Kraken was its lack of a mobile app, for on-the-go trading. It rectified this in October 2019, but was it worth the wait? The app scores high points for UI/UX, and generally gets favourable reviews for IOS users and slightly mixed reviews on Android.

Kraken has a varied fee structure, for both maker and taker, favouring the high volume trader. For example, taker fees for >$50,000 USD are 0.26% of every 30-day trade volume, whereas for <$10 million USD it’s 0.10%, and waived completely for the maker. The fees aren’t particularly high and incentivise the platform for higher volume traders, but for some, this fee structure may be unappealing.

Although Kraken claims to be a beginner-friendly platform for all, many reviewers note that it isn’t the most suitable platform for beginners, including those who have submitted reviews on the Revain platform. It appears that high volume, more experienced traders, are its prime market.

Kraken is largely a global platform, with a few restrictions noted here, places where it fails to meet government regulations, notably Japan, once a major stronghold for the platform, and New York.

In 2015 Kraken somewhat acrimoniously stopped trading in New York following its criticism of the states licensing initiative BitLicense. In 2018 Kraken also refused to participate in a New York state attorney general investigation on ‘Virtual Markets’, which led them to accuse Kraken of possible regulatory violations. Whether there is any truth to this claim, or it was said out of spite, it is hard to say. However, Kraken goes out of its way to emphasise its ethos of self-regulation and platform security.

What’s Next for Kraken

With the COVID-19 pandemic resulting in job losses, Kraken affirmed the resilience of both its platform and crypto ecosystem by announcing that it’s seeking to increase its workforce by 10%. They are interested in professionals with a variety of skills, not necessarily tech, so it will be interesting to see what new initiatives and features arise as a result.

There is no doubt that Kraken deserves its well-respected status, but is it the exchange for you? Revain is a review platform for the crypto community, and they guarantee authentic user feedback by using blockchain technology. Visit to see what Kraken users have to say about it, and compare it with reviews of other exchanges. High-quality reviews, all monitored by AI, are valued and will be rewarded with RVN tokens.