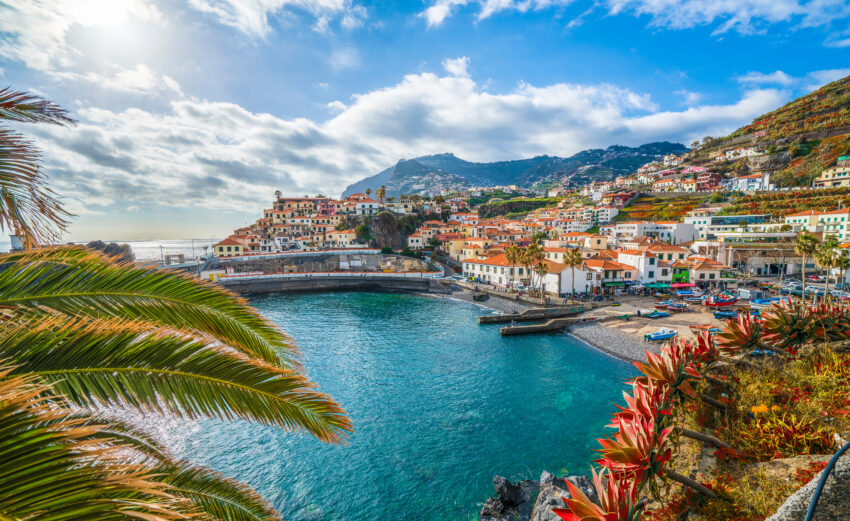 Cobblestone streets wind toward the glistening Atlantic Ocean, where cafés serve fresh seafood, and the coastline’s beauty lures newcomers to this seaside haven. Steeped in history and refreshed by recent economic developments, it is easy to see why Portugal now attracts expatriates – especially Americans – in record numbers.

According to a recent article in the L.A. Times, “Welcome to Portugal, the New Expat Haven,” the population in Portugal has declined in the last decade while the number of foreigners has grown by 40 percent. In 2021, the number of American citizens increased by 45 percent, with Americans among the fastest-growing groups of Westerners moving to the country. Californians comprise an ever-expanding share of this percentage.

As different as night and day, two hotspots are among Luis Horta e Costa’s finds: He invested early in Quinta da Marinha on the rugged coastline and Lisbon’s revitalized historic neighborhood of Intendente. He credits his hunches to a natural penchant for predicting real estate trends.

One of Portugal’s small villages, Melides, is in the center of the Alentejo region with its 40 miles of virtually untouched beaches. The town attracts international attention with its small-town vibe (1,500 full-time residents) and pristine Atlantic Ocean beaches. Horta e Costa has owned real estate in Melides for 25 years, an early adopter. In 2021, Condé Nast Traveler dubbed Melides as “a hidden Portuguese beach spot emerging from under the radar.” A recent New York Times piece called Melides “what St. Tropez used to be in the 1950s,” a surfside oasis.

There are currently a handful of restaurants, a church, a few small stores, and a supermarket in Melides, but development is in the works. Several famous artists and designers now have second homes here, including shoe designer Christian Louboutin, who is developing a 21-room boutique hotel in Melides, according to Women’s Wear Daily.

Costa understands that historic architecture has much to do with Portugal’s allure to expatriates, so Square View developed a charming apartment building from a historic ruin in Intendente. Such real estate developments turn empty buildings into monuments of beauty that appeal to creative newcomers.

“Each time we develop something nice, I love to do it,” Luis Horta e Costa says. “And real estate is like gold. It’s always a safe market.”

New villas and boutique hotels have appeared in seaside towns like Melides, but these areas remain primarily inhabited by locals. Luis Horta e Costa and his family love Melides so much that they are in the process of developing a reproduction of small Alentejo villas inspired by those that locals have lived in for centuries.

“I’m going to transform into 25 small, nice, traditional villas with a square in the middle,” he says.

Americans seeking solace in Portugal want to escape their country’s high housing costs, exorbitant healthcare prices, and political unrest. Retirees seek Portugal’s lower cost of living, mild climate, real estate opportunities and public services. Tech sector experts also enjoy visa benefits in Portugal, where Lisbon is now on par with London, Berlin, Paris and Copenhagen as a start-up hub, according to the E.U. Startup Monitor. (Lisbon hosts the Web Summit tech conference and has done so since 2016, when it moved from Dublin, Ireland.)

The country regularly ranks as a top destination for retirees and remote workers. The 2022 Annual Global Retirement Index developed by International Living Magazine cites Portugal as the fourth best country to live as a retiree. In 2021, Portugal was ranked the fourth most peaceful country in the world, according to the Institute for Economics and Peace, and it is one of the least violent countries in Europe.

A living, breathing anachronism, Portugal is future-looking yet Old World. Its visitors can walk back through the mists of time by viewing Renaissance cathedrals, Moorish palaces, and Roman ruins – and they can also have excellent internet service. Then there’s the multicultural personality of this nation’s population, architecture, and fabulous cuisine.

Portugal’s status as an expatriate haven isn’t a secret; the country created visa pathways to attract outside investors after the Great Recession battered it. Portugal courted foreign professionals to pump up their economy by offering multiple visas, including the Golden Visa, D7 Visa, Student Visa, Tech Visa, Startup Visa and D2.

The most common options are the Golden Visa, which allows applicants to invest in the country and obtain residency cards, and the D7 Visa, a residence visa for retirees. Bonus: Once a permanent resident, a citizen can bring the rest of their family to Portugal through the family reunification process.

Once expatriates gain permanent residency, they receive the standard European-style benefits, including social security and healthcare. Even though Portugal’s healthcare system is not entirely free, the government funds it generously so that it isn’t expensive. (Those under 18 and over 65 get healthcare completely free.) According to International Living Magazine, private healthcare costs about $440 for a basic yearly plan and $1,100 for more extensive coverage.

While Portugal’s popularity has caused rent and house values to skyrocket in the last decade, it remains inexpensive to Americans accustomed to the rising costs of large cities. According to the website numbeo.com, Portugal’s cost of living is significantly less than in America. Compared to New York City, Lisbon, Portugal’s largest city, is 52.56 percent less expensive without rent. Rent in Lisbon is, on average, 70.17 percent lower than in New York City.

Half of Portugal is coastline, so its natural beauty tempts expatriates who love to boat, swim, surf or eat seafood in an environment with Old-World flair and modern amenities. Few places can beat Portugal for unspoiled nature, history, architectural treasures, low cost of living and a quiet lifestyle. Add this to its many financial incentives, and this country on the coast is blaring out its siren’s song to global citizens in search of a perch.