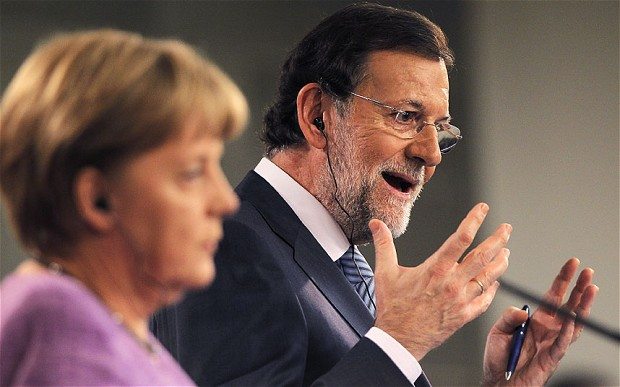 The latest twist in the eurozone’s three-year-old sovereign debt crisis comes as financial markets and some other European partners are pressuring Madrid to seek a rescue programme that would trigger European Central Bank buying of its bonds, reports The Telegraph.

“The Spanish were a bit hesitant but now they are ready to request aid,” a senior European source told Reuters on Monday. Three other senior eurozone sources confirmed the shift in the Spanish position, all speaking on condition of anonymity because they were not authorised to discuss the matter.

German Finance Minister Wolfgang Schaeuble has said Spain is taking all the right steps to overcome its fiscal problems and does not need a bailout, arguing that investors will recognise and reward Spanish reforms in due course.

“It doesn’t make sense to send looming decisions on Greece, Cyprus and possibly also Spain to the Bundestag one by one,” the senior German source said. “Bundling these together makes sense, due to the substance and also politically.”

Participants said there were tense exchanges at a eurozone ministerial meeting in Cyprus in mid-September when Mr Schaeuble told his peers Berlin could not take another bailout for Spain to parliament so soon after lawmakers approved up to €100bn (£80bn) to help Spanish banks in July.

Asked about the reports that Germany was urging Spain to wait, a German government spokesman told Reuters: “Every country decides for itself. Germany isn’t pushing in one direction or the other.”

A spokeswoman for Spain’s Prime Minister Mariano Rajoy said she was not aware of any veto from Germany for an aid request.

“What we are focused on is to get the decisions of the June summit on the banking union implemented. That would send a strong message of confidence to the markets,” she said, referring to an EU decision to centralise oversight of the biggest banks to avoid a repeat of a crisis that has some of its roots in the banking system.

European sources said EU Economic and Monetary Affairs Commissioner Olli Rehn was to deliver a message to Spanish leaders on Monday that Brussels wants them to apply for assistance soon and will not impose onerous conditions beyond the reforms and savings measures outlined by the Spanish government.

Brussels is keen to avoid another paroxysm of the debt crisis by getting support to Spain before it is on the brink of being forced out of the bond market, at the risk of contagion spreading to Italy and other eurozone states.

Eurozone officials are considering a so-called Enhanced Conditions Credit Line that would keep Spain in the credit markets with support from the eurozone rescue funds in the primary bond market and from the ECB in the secondary market.

Mr Rajoy is eager to avoid the political humiliation of conditions being imposed from outside and enforced by the “troika” of inspectors from the International Monetary Fund, European Commission and European Central Bank that has supervised programmes for Greece, Ireland and Portugal.

There has been widespread speculation that Rajoy was stalling a bailout bid until after October 21 regional elections in his home state of Galicia and the Basque Country.
But diplomats said it was German discouragement, not Spanish pride, that was now holding back a request for assistance.

One senior European diplomat said the Spanish position was: “We are in favour if everyone else accepts.”

Madrid did not want to risk submitting an application and having Berlin rebuff it by raising unacceptable conditions such as deep pension cuts or procedural obstacles, he said.

The senior eurozone source said Spanish leaders had understood that making a move now was the best way of avoiding losing market access and being forced into a full state bailout.

“The German U-turns have convinced the Spanish they could end up in the not too distant future in the same position as Greece, Portugal or Ireland – shut out of the markets and with a very harsh adjustment programme,” the source said.

The Spanish government said it would enact 43 structural reforms over the next six months and Brussels said the detailed timetable goes beyond what the Commission has asked of Spain and is an ambitious step forward.

Mr Rehn said he was fully confident Spain would take the necessary steps to restore the economy to health and added it must continue reforming its pension system, linking retirement age to life expectancy.

Mr Rajoy has said pensions are the last thing he would cut as he introduces sweeping savings through the social security system, though he has said he would introduce a new law on pensions before the end of the year.

Spain needs to refinance some €29bn in maturing debt – including €9bn in short-term paper – by the end of this month.

The senior eurozone source said that under one scenario under consideration, Spain was ready to submit the request at the weekend, with German agreement, so eurozone finance ministers could discuss it at their next regular meeting in Luxembourg next Monday.
Failing that, Madrid could make the application before an EU summit in Brussels on October 18 and 19, but eurozone partners such as France and Italy, which are pushing for an early decision, would not want it to drag on beyond then, the source said.