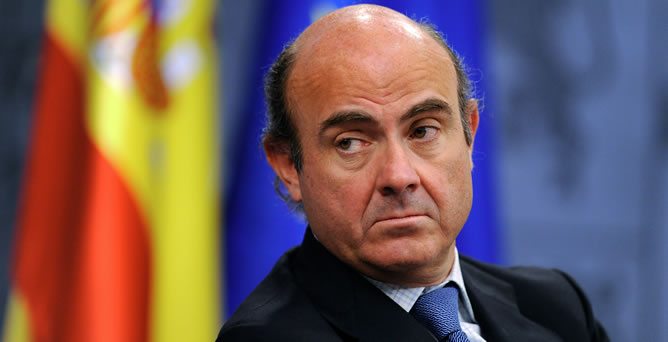 His speech in London was interrupted by a group of protesters who waved placards saying “Spain for sale” – opposition to austerity cuts is high in the eurozone’s fourth-largest economy.

Rumours have circulated that Spain will ask for a bailout, as soon as this weekend, reports The BBC.

But he said: “Spain does not need a bailout at all.”

The Spanish government has found itself in financial difficulty since the 2008 global financial crisis caused a big crash in the country’s over-heated property market.

The latest austerity measures unveiled in Spain’s last budget, which came against a backdrop of violent protests, aim to make savings of around 13bn euros next year, by cutting public sector wages, education, health and social services.

“What we are doing is what we think is the correct thing not only for Spain but for the future of the eurozone,” Mr de Guindos said at the London School of Economics.

Mr de Guindos is in the city to sell foreign investors on the so-called “bad bank”, where Spain will park the poor property assets that are weighing down its lenders.

Spain’s banks will need an injection of 59.3bn euros to survive a serious downturn, an independent audit recently calculated.

“We are convinced that we will be able to bring in investors interested” in the bad bank’s assets, he added.

Spain said in July that it would request eurozone support for its banks.

The Iberian nation is struggling with a shrinking economy and 25% unemployment.

The government is still hoping to avoid requesting a bailout from the eurozone rescue funds, but many think this is inevitable.