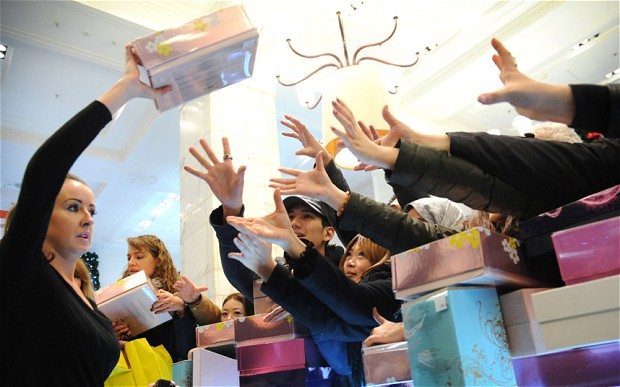 The British Retail Consortium (BRC) is stepping up the pressure on the Chancellor to halt April’s inflation-linked increase in business rates, which will cost shop-owners £175m, reports The Telegraph.

Although several retailers reported Boxing Day records, – with figures from Experian showing a 20pc rise in visits to retailers’ websites – the BRC warns the boom from shoppers hunting bargains over the next few days will be “short-lived” and will not make up for lacklustre sales in the crucial run-up to Christmas.

The proportion of shops lying empty in town centres recently hit a record 11.3pc and analysts fear 2013 will be no better for retailers, as British households are battered by further falls in real pay.

Retailers had hoped the Chancellor would backtrack on April’s 2.6pc business rates rise in the Autumn Statement and are now upping their campaign ahead of the Budget.

A survey of MPs showed that two-thirds believe high streets in their constituencies have declined noticeably over the past five years.

“MPs understand that high streets are focal points for communities and essential to local economies,” said Helen Dickinson, director-general of the BRC. “But many high streets are facing a real endurance test in these challenging times, and rising operating costs are making matters worse.”

Bargain hunters have been out in force over the last five days as many retailers started their sales early. Waitrose was the latest retailer to report record Christmas trading on Thursday.

The upmarket supermarket chain said December 23 was its busiest Sunday in history. Like for like sales at Waitrose over the whole festive period, from November 4 to December 24, were up 4.3pc on 2011.

Despite some successes, however, the BRC estimates sales volumes for December will be flat year-on-year.
Experts at the KPMG/Ipsos Retail Think Tank fear shoppers will remain reluctant to part with their cash in 2013 as inflation will continue to outpace growth in salaries, leading to a 0.8pc fall in households’ incomes.