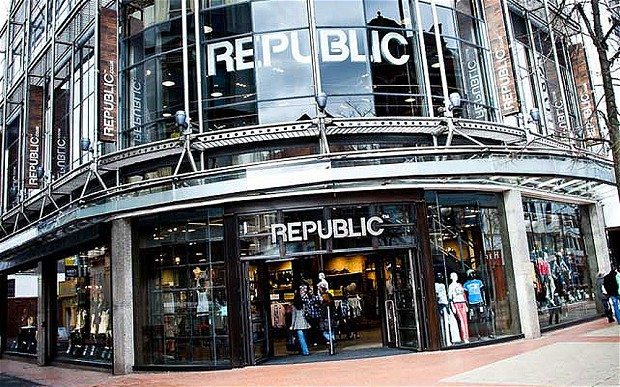 The company, owned by private equity group TPG, has suffered from falling sales and is battling in a fiercely competitive part of the retail industry.

Ernst & Young has been lined up as the administrator and its appointment is expected to be confirmed this morning, reports The Telegraph.

The demise of Republic follows administrators being called to HMV, Jessops, and Blockbuster in January.

Republic has 121 shops in the UK. It was founded in Leeds in 1986 and sells young fashion brands such as G-Star and Diesel.

Andy Bond, the former boss of Asda, became Republic’s chairman a year ago but stepped down in January.

Anusha Couttigane, consultant at retail research group Conlumino, said: “Despite TPG, the US-based private equity group which owns the brand, claiming that underlying sales have remained strong, annual accounts for January 2012 indicated that gross profits were down by 9.17pc and it appears little has changed since then.

“Nevertheless TPG cites crippling rental rates as the main cause for the company’s breakdown, recently hiring KMPG in a desperate bid to offload some of its 121 stores.

“In light of this, news of its administration suggests that attempts to renegotiate monthly payments have failed, bringing the business to a complete standstill and landlords facing the prospect of more vacant units on the high street.

“Operating towards the value end of the market should have placed the retailer in a strong position to take advantage of the consumer trend towards low-cost fashion.

” However, its target youth market has been the hardest hit demographic of the recession and it has struggled to appeal to them as effectively as rivals such as Primark, ASOS or H&M.

“Fashion is a fast-moving industry where brand loyalty is fickle and Republic has failed to keep up with some pretty fierce competitors.”