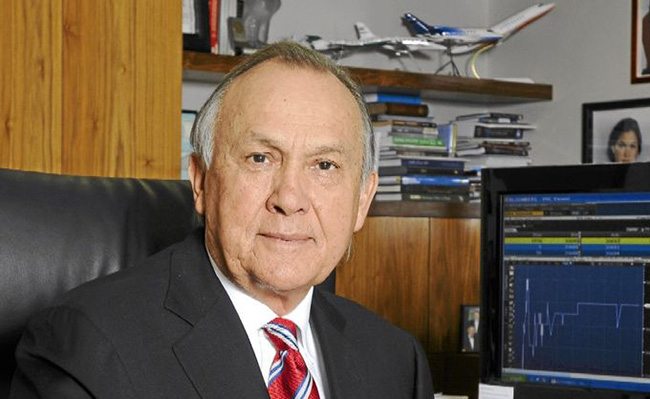 Bloomberg explains that for Wiese, a native of South Africa’s arid Northern Cape province, the move into the U.K. is the latest step in a decades-long retail career. He began working at discounter Pep Stores and, after an interlude in diamond mining, returned as chairman in 1980. Last year he agreed to sell the business for $5.7 billion — which he celebrated with a barbecue — and is now buying retailers in British towns and cities.

“I still enjoy what I’m doing which is building businesses,” Wiese said in an interview last month. “I don’t play golf. I don’t have any particular passion apart from my business and my family and that gives me all the pleasure that I want.”

Brait is a publicly traded investment firm in which Wiese is the largest shareholder, with 35 percent of the shares and a seat on the board. He’s South Africa’s fourth-richest man, with a fortune of about $7.1 billion, according to Bloomberg’s Billionaire Index.

Brait is diversifying out of South Africa as local retailers struggle amid unemployment of 24 percent, prolonged labor disputes and high levels of personal debt that are squeezing household incomes. The rand also has lost 22 percent against the dollar in the past two years.

“Any sizable South African company over time is going to have to diversify outside South Africa because the outlook of the rand is weak and the long-term economic prospects are weighing on that,” said Wayne McCurrie, a money manager at Momentum Wealth. “Buying into New Look gives Brait more exposure to a stable currency and taps into the value offering that is expanding in the U.K.”

Brait looks for businesses with strong market positioning, brands and management teams, and the potential for double-digit profit growth, said its South Africa Chief Executive Officer John Gnodde. The company still has around $800 million to spend on acquisitions.

“We’re in the business of finding good companies to invest in that have a good strong base, a good strong platform, that tick the boxes for us,” he said by phone. “And importantly that we can partner with over the long term.”

Part of the appeal of New Look lies in its expansion into China, which began in 2014. The company will have as many as 80 stores in China by the end of the financial year and also is targeting growth in Poland, Germany and France.

While Wiese says he doesn’t have any passions beyond his job, he has invested in two areas that are important to many South Africans: Animal conservation and wine. He owns a game reserve in the Kalahari desert and the 4,000-hectare (9,884-acre) Lourensford Wine Estate that’s a 45-minute drive east from Cape Town.

“The objective in owning that game reserve is first of all something for me to enjoy, and secondly to make a contribution to conservation,” Wiese said.