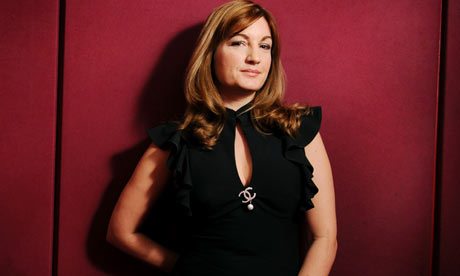 Nearly two years ago the club won the battle to take over the running of the stadium after the Games. But that deal was set aside following a legal challenge from London rival Tottenham Hotspur, negotiations continue to drag on and there is still no guarantee West Ham will ever make its home in the Olympic Park, in Stratford, east London.

“It is like being the winner without getting the prize,” says Brady.

She suggests West Ham could provide 1,000 jobs with its plans for the stadium and hundreds more via the redevelopment of its existing stadium, in nearby Upton Park, which would become homes and shops.

Of course, she sees West Ham as the only viable bidder for the stadium which she would convert into a multi-use facility hosting athletics and educational facilities for young people alongside the Premier League club, reports The Guardian.

She believes that the club could attract 1 million visitors a year to watch football, keeping the whole Olympic Park buzzy.

The project would underpin her plan to transform West Ham’s image into a pillar of the community, together with an aim to back a local Academy school.

“It would be nice to think we changed the culture and created something very special about that football club,” she says.

“We know it’s a big commitment to convert the venue into a truly world class multi-use stadium. We have to invest money that could probably build three brand new Olympic stadiums,” says Brady.

With the mayor of London, Boris Johnson, now in charge of the process anything could happen.

Brady suggests that Virgin’s success in persuading the government to repeal its decision on awarding the west coast mainline contract to First Group after errors were made in considering the bids, means other significant infrastructure deals, including the stadium contract, are now being handled with even more care.

“These decisions are very important to the local community and to us and the processes have to be right otherwise there’s a challenge and it delays it even longer,” she says. Brady denies she is giving the London Legacy Development Corporation a warning, but it would be foolish for anyone to ignore her tough negotiating skills.

She says what drives her is not the money or cachet but the ability to call the shots. “I wanted one thing and that was to be truly independent. I wanted to say when and why and how.”

Growing up, Brady realised independence meant her own money so she skipped university and joined advertising firm Saatchi & Saatchi, setting her on a career path that led her to become the youngest ever boss of a British public limited company.

From the ad agency she got a job selling advertising at London radio station LBC and was head-hunted by David Sullivan to run marketing for his Sunday Sport paper after she persuaded him to buy millions of pounds worth of advertising.

Aged 23, she then talked Sullivan into buying Birmingham City FC out of administration, and putting her in charge. She turned the business around before listing it on the London stock exchange.

For an avowed feminist on a mission to ensure women’s skills and abilities are recognised and rewarded, football was not the easiest road to choose.

After selling Birmingham for £82m in 2009, she admits that arriving at West Ham two years ago was like joining a men-only country club.

“There were no senior women and it was all about cars and membership of the Ivy club. It was all about power and nothing about responsibility,” she says.

Brady remains the only woman on the company’s four-person board but she says half of her senior management team are now female and she is about to hire another woman.

She promoted people from within the business as well as bringing in new blood. “Women were there but they couldn’t see what was under their noses,” she says.

For her, promoting women in the workplace is not just a hobby horse but the key to running a strong business. “The best companies are those with different people from different backgrounds and different experiences,” Brady says.

She points out that football is not just about the game but about finance, pitch maintenance, catering and property.

“We need so many different specific skill sets and it doesn’t matter to us where you get that,” she says. She adds several more female bosses are on track to lead Premier League clubs in the future.

Brady, however, does not believe female boardroom quotas are the right way forward. As a high profile and successful businesswoman, Brady gets offered a number of non-executive directorships every month from companies keen to get some female perspective. But they are all missing the point, she says, which is “to encourage a younger generation of women who can be new investors, businesswomen and directors”.

Rather than quotas, she wants companies who do not have women on their boards to be compelled to explain why not in their annual report.

Beyond that, she says, workplaces need to adapt so that other women do not feel they have to return to work just weeks after having a baby in order to further their career – as she did when she was running Birmingham City.

She would also make childcare a tax deductible expense.

“It would raise more money than it would cost and be a first step in recognising that childcare is important if you are going to work.”

Brady has a small stake in West Ham, but is also a major shareholder in a number of smaller companies including Mentore, a business whose aim is to prepare up and coming female executives for the boardroom.

So would Brady further her cause by working with the government? Scrunching up her nose in disgust at the idea, she says: “I don’t want to be part of some spin, with no power to do anything and no money to do something. I want to see something happen.”.