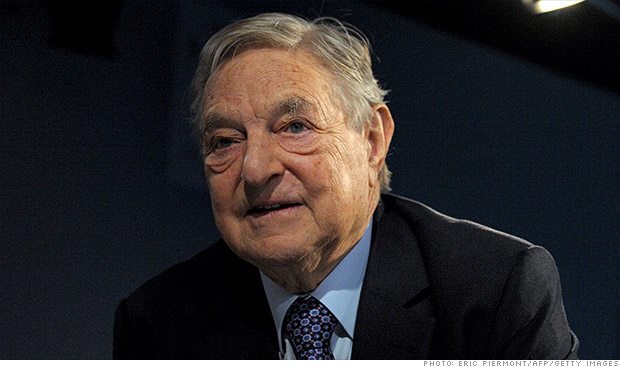 George Soros, the billionaire speculator best known as “the man who broke the Bank of England” in 1992, has launched a stinging critique of Germany’s role in the euro crisis and suggested the single currency’s prospects would be improved if its most dominant member were to quit, reports The Guardian.

In an incendiary speech made on Tuesday afternoon in Germany’s financial centre of Frankfurt, the hedge fund trader told Europe’s richest country it had gone too far during the bailout of Cyprus, was itself heading for recession and should either leave the euro or reverse its long held opposition to eurobonds – a form of sovereign debt that would mean each member country’s borrowings were guaranteed by the whole eurozone.

“My first preference is eurobonds; my second is Germany leaving the euro,” he said in his lecture, entitled: How to save the European Union from the euro crisis.

“It is up to Germany to decide whether it is willing to authorise eurobonds or not,” he said at Frankfurt’s centre for financial studies.

“But it has no right to prevent the heavily indebted countries from escaping their misery by banding together and issuing eurobonds.

“In other words, if Germany is opposed to eurobonds it should consider leaving the euro and letting others introduce them.”

In an address which appealed over German chancellor Angela Merkel and directly to German voters, who go to the polls in federal elections later this year, Soros implored the country to change course.

“I hope that by offering you a different perspective I may get you to reconsider your position before more damage is done,” he said. “That is my goal in coming here.”

He added: “The financial problem is that Germany is imposing the wrong policies on the eurozone. Austerity doesn’t work. You cannot shrink the debt burden by shrinking the deficit.

“In the bailout of Cyprus, Germany went too far … chancellor Merkel would have liked to put the euro crisis on ice at least until after the elections, but it is back in force.

“The German public may be unaware of this because Cyprus was a tremendous political victory for chancellor Merkel. No country will dare to challenge her will.

“Germany itself remains relatively unaffected by the deepening depression that is enveloping the eurozone. I expect, however, that by the time of the elections Germany will also be in recession.

“That is because the monetary policy pursued by the eurozone is out of sync with the other major currencies. The others are engaged in quantitative easing.

“The Bank of Japan was the last holdout but it changed sides recently. A weaker yen coupled with the weakness in Europe is bound to affect Germany’s exports.”

Soros, a Hungarian whose Quantum fund has stopped managing funds for outside investors, has previously criticised Germany’s handling of the crisis as well as arguing for eurobonds as a partial solution.

However, his plan comes with a major problem in that Germany has long been staunchly opposed to the idea, which would increase its own cost of borrowing, as well as arguing that the process would require treaty change.

Meanwhile many Germans believe that eurozone members should live with the consequences of their own debts.

Continued German resistance to eurobonds would leave the billionaire simply calling for a German withdrawal from the euro, which he argues would benefit the remaining countries in the single currency.

“If Germany left, the euro would depreciate,” he said. “The debtor countries would regain their competitiveness. Their debt would diminish in real terms and, if they issued eurobonds, the threat of default would disappear. Their debt would suddenly become sustainable … and Europe would escape the looming depression.”

Soros made his name in 1992 by making $1bn (£650m) in a bet against the pound as it was forced from the Exchange Rate Mechanism (ERM).