Wages have fallen in real terms for the second month in a row as the cost-of-living crunch gathers pace.

Pay growth accelerated from 3.8% in January but is failing to keep pace with rapidly accelerating inflation. Prices rose by 5.5% in January and inflation reached 6.2% in February.

The cost of living crunch is only set to intensify: today’s ONS data does not capture the increase in the energy price cap this month, nor the impact of supply chain disruption and soaring oil and gas prices due to Russia’s invasion of Ukraine.

The Bank of England expects inflation to peak at over 8% later this year and some City forecasts think 10% inflation could be possible.

Today’s pay data is likely to heap more pressure on the Chancellor to do more to help low income families deal with the cost crunch. PwC estimates that the UK’s lowest earners face a £1,300 fall in incomes this year as energy and food costs soar.

ONS data showed unemployment fell yet again to 3.8% in February, down from 3.9%.

Mims Davies MP, Minister for Employment, said: “Behind these ONS figures we know this is a difficult time for many workers and families.

“We’re doing everything we can to help, with our Way to Work scheme which is supporting people coming through the doors of our Jobcentres to move into better paid, higher skilled work. As well as increasing the National Living and Minimum Wage all backed up by over £22 billion of targeted investment.”

Commenting on the announcement, Eugenia Migliori, CBI Principal Policy Adviser, said: “The UK economy continues to create jobs, but businesses are still struggling to hire and pay is failing to keep up with inflation. Persistent skills and labour shortages, alongside rising costs, is putting a strain on households and dampening business optimism for the months ahead.
“Addressing the skills challenges facing the country requires bold action. Replacing the apprenticeship levy for a new Skills Challenge Fund will allow firms to fund more high-quality training especially in areas of future demand. Acting now will help us meet the UK’s long-term skills need.”

Also commenting on the announcement, Kieran Boyle, MD of Gloucester-based CKB Recruitment said: “There is a gargantuan skills gap in the jobs market. This is easily the most candidate-driven market we have ever experienced. The fight for talent is being won by the companies who have embraced flexible working, as people now want this as a rule. The firms who have stuck to wanting everyone in the office five days a week are really starting to struggle to attract the best talent, as well as retain it. Post-pandemic lifestyle changes have seen the amount of people already in a job looking elsewhere go through the roof.” 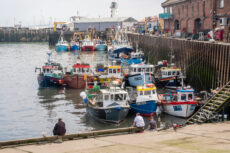