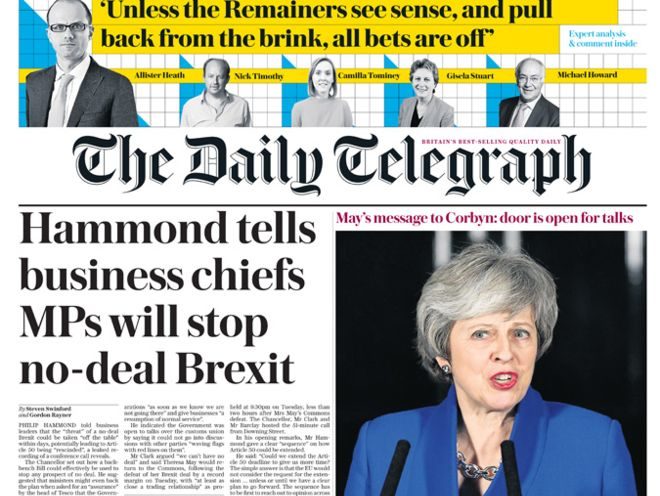 The Daily and Sunday Telegraph newspapers have been put up for sale as their owner, the Barclay family, reviews its multibillion-pound portfolio of British investments.

Aidan, 63, and Howard Barclay, 59, sons of Sir David Barclay, 84, are examining the ownership of the family’s holdings, including The Ritz hotel and Shop Direct, the online retailer.

Sir David and his twin Sir Frederick are estimated to be worth £8 billion at No 17 in The Sunday Times Rich List. The brothers made their fortune investing in London property before diversifying into shipping, retail, hotels and newspapers. They live in Brecqhou in the Channel Islands and in Monaco.

The revelation comes after months of speculation about the future ownership of the Telegraph newspapers, which the family has owned since 2004. Reports have suggested Sir Frederick has been keen to sell the business.

The strategic review was prompted by the realisation that the family is no longer as united as it once was, amid what an insider called a generational shift. “The family has got a lot bigger over the last three decades. Interests are no longer aligned in the way they once were,” a senior executive close to the Barclays said.

Slimming down the portfolio of investments will generate the capital to allow the “buyout” of some family members, according to insiders.

Financial advisers are expected to be appointed to value the family’s businesses and seek buyers. The family hopes that the review can be completed within 12 to 18 months.

A spokesman for the Barclay family refused to comment.

It was revealed earlier this month that the family was canvassing interest from potential suitors for The Ritz, with a mooted price tag of £800 million, equivalent to £6.1 million per bedroom.

The family bought the hotel in Piccadilly, central London, for £75 million in 1995. Richard Faber, 45, Sir Frederick’s former son-in-law, is advising the family on their options for the hotel.

Shop Direct, which has annual sales of more than £1.9 billion, also could be sold, although it is understood that Aidan and Howard are keen to remain investors in the business, despite a recent hit from payouts for the mis-selling of payment protection insurance.

Recent investments in logistics and new financial products for customers have yet to pay dividends for the retailer, they believe.

One option being considered would be to sell a 25 per cent stake in Shop Direct to a sovereign wealth fund or private equity buyer. Members of the Barclay family who wished could retain a share of the remaining 75 per cent.

Shop Direct was created by the family through the merger of Littlewoods and the mail order business of GUS. The business has benefited from the rise in online shopping.

Telegraph newspapers recently said that its operating profits had fallen from £16.3 million in 2017 to £3.1 million last year as revenues slipped by £7 million to £271 million. However, the family expect the newspaper group to show “significant improvement” in the current financial year. The Barclays bought the newspapers in 2004 from Hollinger for £665 million.

In 2017, they cut the book value of the company by £114 million, having taken a £150 million non-cash impairment charge two years earlier.

It is understood that The Spectator magazine is not part of the review.